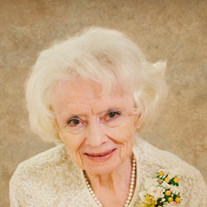 Gloria Louise Coy Barber was born at the Tacoma General Hospital in Tacoma, Washington on March 1, 1925. She passed away peacefully on March 21, 2022 in Richland, Washington. Gloria is the oldest daughter of Dewey S. and Nida (Wright) Coy. Gloria married D. Keith Barber on June 23, 1943 in the Cardston Alberta Temple of The Church of Jesus Christ of Latter-day Saints. They have four children: Lynne (Michael) Ahlstrom of Issaquah, WA; Lowell (Shannon) Barber of Richland, WA; Paul (Luana) Barber of Layton, Utah; Lorin (Robin) Barber presently serving a church mission in Athens, Greece. Gloria is also survived by her four sisters: Virginia (Russell) Nickel of Lacey, WA; Shirley Wright of Olympia, WA; Mary Lee Backstein of University Place, WA; and Nadine (Reed) King of Corvallis, OR. Gloria and Keith moved to Pasco, Washington in December 1953, where Keith managed the Beneficial Life Insurance Company Agency for many years. Gloria was an energetic participant in church and community activities. She served two, two-year terms as President of the Franklin County Republican Women's Organization during the 1970's and 1980's. She was involved in her children's Parent Teacher Association (PTA). She taught dance to church and school youth groups. She served faithfully in many church callings including early morning seminary teacher for eight years, Pasco Washington Stake Relief Society President, and as a devoted temple worker in the Seattle Washington Temple for twenty years. Gloria was a loving mother, grandmother and great-grandmother. She was keenly interested in the physical and spiritual welfare of all her posterity. She wrote hundreds of letters to friends and family each year - always remembering birthdays and other special days. She has 22 grandchildren and 56 great-grandchildren with two more on the way. Gloria was preceded in death by her husband, Keith; her parents Dewey S. and Nida (Wright) Coy; and a grandson, Derek A. Barber. Funeral services will be held in Tacoma, WA on Saturday, March 26, 2022 at 12:00 noon. You can join our zoom at this link: https://zoom.us/j/91218774718 We, her posterity, are grateful for the heritage of knowledge and faith that families can be together forever, because of the atoning sacrifice of the Lord, Jesus Christ.

Gloria Louise Coy Barber was born at the Tacoma General Hospital in Tacoma, Washington on March 1, 1925. She passed away peacefully on March 21, 2022 in Richland, Washington. Gloria is the oldest daughter of Dewey S. and Nida (Wright) Coy.... View Obituary & Service Information

The family of Gloria L Barber created this Life Tributes page to make it easy to share your memories.