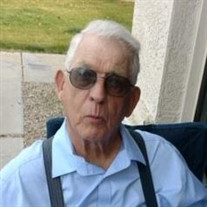 September 3, 1934 - November 7, 2019 Glenn McQuilkin of Kennewick, Washington was born September 3, 1934 in Spokane, Washington, and passed away on November 7, 2019 in Kennewick, Washington at the age of 85. Glenn was raised in Emmett, Idaho and attended school in Idaho before joining the Navy in 1952, serving on the USS Salisbury Sound while the Korean War was still active. Glenn was discharged from the Navy in August of 1955 and was in the Navy reserves until January of 1960. While still in the Navy, Glenn married Caroline Bales on June 3, 1955 in Coeur d'Alene, Idaho. After serving his Country, Glenn moved back to Spokane where he and Carol started their family. After attending machinist trade school, Glenn and Carol moved to Moses Lake, WA where he started his career in livestock at "Farm In A Day Dairy". Glenn soon went to work for "Courtright Feed Lot" for five years. Glenn then moved his family back to Emmett, Idaho to begin a 50-year career working for "JR Simplot Land and Livestock". Glenn managed feedlots in Caldwell, Idaho, Boardman, Oregon, and Wallula, Washington. Glenn retired as an Area Manager in September of 1998 and moved into a smaller role while still working with "JR Simplot" and retired from that role in August of 2019. Glenn enjoyed spending time with his children, grandchildren, and great-grandchildren along with taking family trips to the Oregon coast. Glenn is survived by his wife Carol of 64 years; five children: Ronald McQuilkin of Kennewick, WA.; Shirley Purcell (Blair) of Boardman, OR.; Michael McQuilkin (Kathy) of Chandler, AZ.; Barbara Klug of Pasco, WA; and Billie Jo McQuilkin (Robert Rotter) of Pasco, WA., and sister Alice Howard (Ron) of Emmett, ID. Glenn is also survived by 20 grandchildren and 36 great-grandchildren, and numerous nieces and nephews. Glenn was proceeded in death by his father and stepmother, Neal and Jesse McQuilkin; mother and stepfather, Grace and Shurl Bray; two brothers, John McQuilkin and Donald Bray; and granddaughter Justine Klug. Memorial Services will be held at 12:00 noon Friday, November 15, 2019 at The Living Room Community Church, 1409 S. Garfield Street, Kennewick, WA. Burial following services at Desert Lawns Memorial Park, 1401 S. Union, Kennewick, WA. Our family would like to thank the employees at the Chaplaincy Hospice House for their excellent care of our father in his final days. In lieu of flowers, you may donate to Chaplaincy Hospice House or a charity of your choice.

The family of Glenn Dwight McQuilkin created this Life Tributes page to make it easy to share your memories.