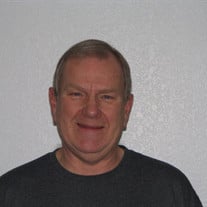 Gerald L. Brown was born November 9, 1946 to Ruth Prigge Brown and Donald Brown in Rochester, Minnesota. He graduated from Richfield High School and went on to take various parts and service technical training programs locally and out of state. He met his wife, Mary Beardsley Brown, on a blind date in 1963. They were married November 5, 1965 and began their life together in the Minneapolis area. Gerry joined the Army in 1966 and spent 13 years between the Army and National Guard. n 1970, their son, Keith, was born. After a few trips to the West, he wanted to make a move. He took advantage of a job offer in Salem, Oregon, and the family moved. On weekends there was camping in the Three Sisters mountains or Jeep 4-wheeling club activities. They had a large group of friends who became family and have many happy memories and legendary tales of camping adventures and celebrations. In 1986, Gerry accepted a position as service manager for Columbia Motors Mercedes dealership in the Tri- Cities. He would commute home on weekends, until the family officially moved to the area in 1987. He and Mary loved to travel and went on many cruises and tropical vacations. An avid camper to the end, Gerry and Mary took many RV road trips to several states. They spent many weekends camping with their son and daughter-in-law, Rachelle. In October 2020, Gerry and Mary purchased 10 acres of wilderness property near Kettle Falls and spent much of the next year turning it into a permanent campsite. Gerry and Keith always had a project in the works. They restored a Jeep pick- up that Keith drove after he got his license. Gerry could fix almost anything and enjoyed helping others. Whenever Keith needed help with RV projects, repairs, or installations, or building fences, he called his dad who called on Keith in return. They were the best of friends, and Keith has many happy memories of times they worked together. Gerry was preceded in death by his parents; and in-laws, John and Dorothy; his sister, Pat, and four brothers-in-law. He is survived by his loving wife of 56 years, Mary; his son, Keith, and daughter-in-law, Rachelle; his sister, Carole Iverson; three brothers; Tom (Cheryl), Jeff, and Donny; brother-in-law, John (Ranelle) Beardsley; sisters-in-law, Ann (Dave) Evans, Lynne Faust, Jean Bourgeois, and Lesley (Bruce) Mead; and many nieces and nephews, as well as his dog, Willy.

Gerald L. Brown was born November 9, 1946 to Ruth Prigge Brown and Donald Brown in Rochester, Minnesota. He graduated from Richfield High School and went on to take various parts and service technical training programs locally and out of state. He... View Obituary & Service Information

The family of Gerald Lynn Brown created this Life Tributes page to make it easy to share your memories.