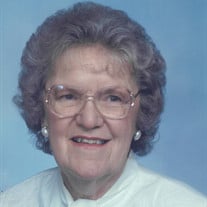 At the age of 97, Freda Alleen (Brodhead Waddoups) McCorkle passed away peacefully on January 26, 2021. She was born in Dayton, Washington to Claude and Stella Brodhead on October 10, 1923. Growing up on a farm in Bundy Hollow, she was the fourth of eight children and traveled to a one-room school house in a horse drawn buggy. She graduated from Dayton High School in 1941, attended Washington State College and a business college in Walla Walla, Washington. She met a B-24 navigator stationed in Walla Walla at a USO dance during World War II and married H. Marr Waddoups on September 28, 1945. After living in Logan, Utah where Marr finished college, they made homes in Bend, Pendleton, and Milton-Freewater, Oregon and Othello, Washington before settling in Kennewick, Washington. They had 4 children, Marla, Gary, Jan, and Jon. She was a 4-H leader, PTA president and room mother in her children's classrooms. She participated in the Toastmistress Club. She and Marr enjoyed being a host family for several foreign exchange students and traveling to Europe and Mexico to meet the families. Freda was the bookkeeper for their agricultural business, Marr Waddoups and Associates. On July 2, 1982 Freda married Richard "Roy" McCorkle. They enjoyed camping. She became a court appointed Guardian Ad Litem. For many years she was the bookkeeper and hostess for her son's restaurant, Blackberry's. Many of the Blackberry cobblers served there were made by her. The First Christian Church in Kennewick, Washington was her church home. She prepared meals for Vacation Bible School and was active in Christian Women's Fellowship. She donated generously to numerous charities and political advocacy groups. Her last four years were spent living at Fieldstone Grandridge where she enjoyed completing jigsaw puzzles, participating in word games and listening to live music while enjoying a latte or root beer float. Since the Covid Pandemic, her greatest desire was to have company again. She was preceded in death by her second husband Roy McCorkle, her parents, Claude and Stella Brodhead, her brothers, Kennith, Dwight and Claude Brodhead and her sisters Mildred Smith, Lanita Ashley, and Betty Ann Garrison. She is survived by her four children, Marla (John) Werner, Gary (Cynthia) Waddoups, Jan Tomlinson, and Jon (Julie) Waddoups. She was proud of her grandchildren, Michele Holden, Jeneane Conway, Jake Waddoups, Kati Konkol (Steve), Douglas Werner (Kathryn) and Cyndee Wanyonyi (Lumuli). She was known as "Gigi" to her 12 great grandchildren: Alex Holden, Kellen and Andrew Walford, Jorja and Jude Conway, Ben and Emily Konkol, Julius, Cici and Selah Wanyonyi, and Nathan and Eliza Werner. She is also survived by one sister, Margie Stanifer, a sister-in-law, Marlene Brodhead, brother-in-law, Bob Garrison and numerous nieces and nephews.

At the age of 97, Freda Alleen (Brodhead Waddoups) McCorkle passed away peacefully on January 26, 2021. She was born in Dayton, Washington to Claude and Stella Brodhead on October 10, 1923. Growing up on a farm in Bundy Hollow, she was the fourth... View Obituary & Service Information

The family of Freda A. McCorkle created this Life Tributes page to make it easy to share your memories.

At the age of 97, Freda Alleen (Brodhead Waddoups) McCorkle passed...