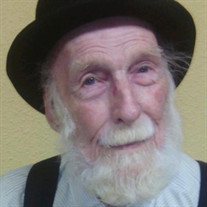 On June 11th, at 90 years old, Frank Nicholson of Benton City, WA was brought down by what could only have been kryptonite; because surely the man that had survived three heart attacks, three strokes, a double bypass, having two stents put in, a broken hip, the teen years of two daughters, a son and the loss of his gallbladder could be none other than Superman disguised as a loving father and grandfather. Superman or not, he was a hero to his granddaughter, who feels blessed to have been at his side, along with his loving daughters, when he left us in search of bigger and better yard sales in heaven. Frank was born in Shelby, NC on June 19, 1930, to Homa and Ruth Nicholson. He was the eldest of three children with one sister and one brother. The family moved to Indiana then to Washington where Frank attended Ki-Be High School. Frank excelled at sports and played football, baseball, and was the star of the basketball team during his senior year. He was one of eleven students in the graduating class of 1948. This is also where he met his future wife, Sally. September 9th, 1950, Frank and Sally were married in Prosser, WA. They enjoyed 55 years of bickering until her passing in 2005. Frank worked for Guy F. Atkinson for 34 years; he moved his family to multiple towns in California and Washington. He also transferred to Oregon, New York and Venezuela. He was proud of his work, especially the complete setup of a computerized payroll system in Canada in the late 70's. He had so many stories about his various adventures at work: one was when he was working in Venezuela, he had guards armed with machine guns escort him each week to the pay shack with a briefcase handcuffed to his wrist with the payroll in it. Frank was preceded in death by wife, Sally Nicholson, his parents, Homa and Ruth Nicholson; sister, Vonda Lee Nicholson; son, Anthony "Tony" Nicholson; grandson, Justin Nicholson; ferrets, Clepto, Fats, and Lady; squirrels, Squeak and Georgia; and a fat cat named Monster. Frank leaves behind 52 broken printers, 173 cameras, 300 watches, 15 TV dinners, 11 Banquet pot pies, many items of questionable purpose and origin, a younger brother, Bobby Joe Nicholson; 2 daughters, Beth "Sis" Simmons (and husband Monte) and Paige "Pooh" (or more recently, "a boss") Anstead; daughter-in-law Dianna Nicholson; 5 grandchildren, Jennifer Rowden, Tony Nicholson Jr., Monte Simmons Jr., Andrea Mazac, and Sarah Monroe; 19 great-grandchildren; and 2 great-great-grandchildren with another on the way. Also, an even fatter cat named Stubby (Ferocious). There will be a rosary at the St. Francis Cabrini Catholic Church in Benton City June 29th at 6PM and a funeral service at St. Francis Cabrini Catholic Church, 1000 Horne Road in Benton City on June 30th at 10AM.

On June 11th, at 90 years old, Frank Nicholson of Benton City, WA was brought down by what could only have been kryptonite; because surely the man that had survived three heart attacks, three strokes, a double bypass, having two stents put in,... View Obituary & Service Information

The family of Franklin Nicholson created this Life Tributes page to make it easy to share your memories.