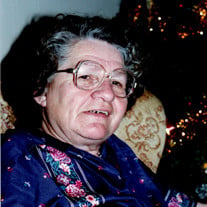 Evelyn Magdalene "Dolly" Granger went home to be with Our Lord on January 14, 2020. Dolly began her journey of life in Minneapolis, MN, on January 26, 1932. The oldest of 11 children born to Susan Magdalene Sayers, she was raised in the small town of Ball Club, MN, by her mother and stepfather, Ambrose Schaaf. It was during this time that she acquired her ability for hard work and her deep faith and love of Jesus Christ and the Catholic Church. These things kept her going through good times and bad, and in doing so, she helped instill these values in her children and grandchildren. When the going got rough she would always tell us to pray and trust in God. During her late teens, mom ended up in the carnival where she starred as The Electric Woman. She would sit in a chair that was charged with magnetic energy and hold light bulbs in her hands as she wowed the crowd with her showmanship. It was on the carnival circuit where she met her future husband, Allan Granger. After a few years on the circuit together they gave up the circus life to raise a family. It was at this time Al and Dolly settled in Great Falls, MT. Al and Dolly were together almost 50 years until his passing in 1998. From this union, Dolly had 9 children: Ellen, Mary Louise, Butch, Marvin, Roger, David, Bryan, Laurena, and Selena. While in Great Falls, Dolly worked hard at raising children in addition to having a job cleaning apartments for the Elms, and the Rollands hotels. In 1974, Dolly and family found themselves living in Smelterville, ID, where she worked for the Sunshine Inn and the Kellogg Senior Center before moving to Richland, WA, in 1981. Many family friends and family followed Dolly and Al to the Tricities area, often staying with them as they got their own start. After Allan passed, Dolly moved from Finley to Richland where she resided the past 20 years. During retirement, Mom was blessed with caring for many grand and great grandchildren. In addition to that, her hobbies included sewing quilts and pillows and other hobby items with just the right amount of bling to make them unique. She enjoyed long walks as well as much time spent talking, drinking coffee, and having a smoke on her front porch with many neighbors, family, and friends. Also, she always loved a good practical joke and never missed a moment to pull a fast one on someone when they were not looking. Mom was blessed with a wonderful sense of humor and always loved a good laugh even if it was on herself. Never one to complain, she was always ready to listen and often ended her counsel with "You must pray and believe in God." Dolly was generous to a fault and spent her lifetime giving to charities and the church. One of her favorites was Father Flanagan's Home for Wayward Boys. She was a devout Catholic and attended Christ the King and St. Joseph's parishes during her time in Washington. In her later years, Dolly loved spending time playing with her grandchildren while watching them enjoy her "secret family recipe" of cinnamon toast. Her home was always open to the multitude of family and friends that passed through her door. In addition, every Easter or Christmas we would be sure to receive a card from her as she lit a votive candle and prayed for our well-being. Dolly also loved to dance and listen to old time rock and roll, along with her Native American music. One of her favorite pastimes was watching the Dr. Phil Show and teasing her kids about themselves needing to be on his show. Mom's house was always a safe place for her grandchildren to come over and stay. Many of her grandchildren lived with her over the years or simply hid out with Great Gramma. Dolly taught her children how to Indian leg wrestle when she was young, getting down in the grass with us and whipping us all at it. One thing that stands out is mom's ability to be there for us all in a crisis no matter how big or small the crisis was, she was always interested and willing to help. She gave a special kind of love and friendship only a grandma could give. Besides Allan, Dolly was preceded in death by her children Mary Louise, Bryan, and Marvin, granddaughter Neila Goodspeed, her mother Susan Sayers Schaaf, brothers Al and Ronnie Schaaf, sisters Karen Applebee and Nancy Arnoux. She is survived by her brothers Frank Schaaf, Onamia MN; and Bill (Barb) Schaaf, Onamia MN; sisters Marilyn Whitney, Michigan; Clara Kruse, Onamia MN; Susanna Schaaf, Onamia, MN; MaryAnn Shed, Onamia MN; and daughters Ellen (Gary) Roth, Puyallup, WA; Laurena Chambliss, Coeur d'Alene, ID; and Selena Carrick, Richland, WA; sons Butch (Kay) Granger, Kalispell, MT; Roger Granger, Columbia Falls, MT; David (Dawn) Granger, Garrison, MN; 14 grandchildren, 34 great grandchildren, and 5 great great grandchildren. Muellers Funeral Home (1401 So. Union St, Kennewick) is caring for Dolly. A viewing will be at Mueller's Tri-Cities Funeral Home from 4 to 8 p.m. Friday, January 17, followed by a celebration of Mass at Christ the King Catholic Church, 1111 Stevens Blvd, Richland, WA, at 10:30 a.m. Saturday, January 18, followed by a graveside service at Desert Lawn Memorial Park, 1401 So. Union St, Kennewick.

Evelyn Magdalene "Dolly" Granger went home to be with Our Lord on January 14, 2020. Dolly began her journey of life in Minneapolis, MN, on January 26, 1932. The oldest of 11 children born to Susan Magdalene Sayers, she was raised in the small... View Obituary & Service Information

The family of Evelyn M. Granger created this Life Tributes page to make it easy to share your memories.

Evelyn Magdalene &quot;Dolly&quot; Granger went home to be with Our Lord...