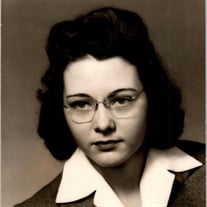 Eunice Margret Sandgren, 98, of Kennewick, died August 29, 2020, at home. She was born to Douglas and Minnie Staley on March 18, 1922, in Middletown, Ohio. Enice was a graduate of Taylor University in Upland, Indiana. Eunice had taken time off from attending the university to care for her fiancée's sister, who was terminally ill. After her passing, Eunice finished her degree. In 1946, Eunice married Duane Sandgren of Austin, Minnesota. Duane and Eunice settled and taught in the Carmel, California area. Eunice was a Middle School Home Economics Teacher. Duane was a Psychology professor at Hartnell College. Eunice cared for husband, Duane, during his ongoing bout with cancer while she sill continued to teach. Duane passed away in 1974. A few years later, Eunice devoted herself to the care of her widowed mother-in-law, Esther Sandgren. After Eunice retired from teaching, Eunice and Esther moved to Kennewick, Washington until Esther's passing in 1985. In 1986, Eunice moved back to Middletown, Ohio to care for her father. She lived there 10 years until his passing. Eunice then returned to Kennewick, where she enjoyed attending church and spending time with friends and family in the area. Later in life, Eunice cared for Dr. Paul Sandgren, Duane Sandgren's youngest brother. Eunice and Paul had married in a religious ceremony with family and friends. Paul passed away in August of 2019. Eunice's life was extraordinary…a life of giving…giving of herself and her time caring for others. Eunice was preceded in death by her parents Douglas and Minnie Staley, brothers Douglas Jr. and Ray and two sisters Millie and Clema Josephine. Eunice is survived by 24 nieces and nephews and a great number of grand and great grandnieces and nephews. A Memorial service will be held at Clearwater Baptist Church in Kennewick, Washington. Flowers and donations can be sent to Clearwater Baptist Church.

Eunice Margret Sandgren, 98, of Kennewick, died August 29, 2020, at home. She was born to Douglas and Minnie Staley on March 18, 1922, in Middletown, Ohio. Enice was a graduate of Taylor University in Upland, Indiana. Eunice had taken time... View Obituary & Service Information

The family of Eunice Margaret Sandgren created this Life Tributes page to make it easy to share your memories.