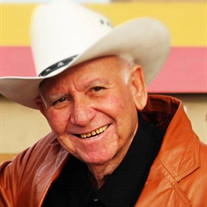 Eugenio "Gene" Robles went to be with his Heavenly Father on Wednesday, January 29, 2020 at the age of 86 in Kennewick, WA. Gene was born on August 10, 1933 in Matamoros, Mexico to Maria De La Luz (Quintanilla) and Jesus Robles. He was the youngest of seven children. Gene is survived his loving wife Julia Robles of Kennewick, Son Arthur Robles of Kennewick, daughter Hortensia (Tange) Estrada of Kennewick, and daughter Sylvia Stredwick of Tualatin, OR. Grandchildren Carlos (Ana) Robles, Tina (Jason) Walters, Richard (Sarah) Estrada, Robert Estrada, Rebecca (James) Hendershot, Roxanna Pelletier, Rachel Robles-Martinez, Crystal (Jason) Adams, Celena Robles, Valencia Jones, Julia (Mark) Davenport, Samantha (Jake) Urry, and Denise Beckwith. Many great-grandchildren, numerous nephews and nieces, family and friends. Gene is preceded in death by his parents, his daughter Norma Armenta, his daughter Rosa Beckwith and his siblings. Gene spent his younger years in Mexico until he met the love of his life, Julia Banda, in Texas at age 17. Gene swam the Rio Grande River and traveled every week to see the girl of his dreams in Harlingen, TX. He finally won her heart and they were married in Harlingen, Texas on November 18th, 1951. They celebrated their 68th wedding anniversary in 2019. Gene and Julie came to Washington State in 1955. They first moved to West Richland, then to Kennewick and then to Benton City in 1977. He worked at a local body shop and then owned his own shop, he worked for Northwest Rural Opportunities (NRO), he was part owner of Atzlan Construction and worked at Battelle, where he finally retired in 1992. "The Ranch" in Benton City will always have a special place in everyone's heart. There are many special memories that were made at The Ranch because it was the place to go for all family events. In 1993, they moved back to Harlingen, TX and stayed until 2016. They moved back to Kennewick, WA and lived with their grandson Carlos Robles and his family. Carlos will always have a special place in his grandfather's heart, for he and his three boys (Carlos Jr, Julian, and Isaac) will carry on the Robles name. His favorite hobbies were hunting and camping. He loved to sing his Spanish songs. He would always sing anywhere and to anyone. Gene brought so much light and laughter to anyone whom had the pleasure of knowing him. His smile, his kind heart and his "Macho Man" personality, will be missed my many, but most of all by all of his family. The memories will last forever in our hearts. We know his girls, Norma and Rosie, greeted him with open arms as he walked through the heavenly doors with his cowboy hat and suit on; their daddy is home. A viewing will be from 4-6pm and rosary from 6-7pm on Friday February 14th, 2020 at Mueller's Tri-Cities Funeral Home, 1401 Union St, Kennewick. Mass will be on Saturday February 15th at 10am at St Patrick's Catholic Church, 1320 W Henry, Pasco. Burial will follow at Desert Lawn Memorial Park 1401 S Union St, Kennewick.

Eugenio "Gene" Robles went to be with his Heavenly Father on Wednesday, January 29, 2020 at the age of 86 in Kennewick, WA. Gene was born on August 10, 1933 in Matamoros, Mexico to Maria De La Luz (Quintanilla) and Jesus Robles. He was the... View Obituary & Service Information

The family of Eugene Robles created this Life Tributes page to make it easy to share your memories.

Eugenio &quot;Gene&quot; Robles went to be with his Heavenly Father on...