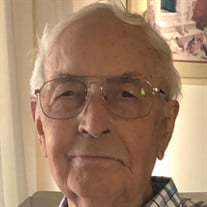 Our loving Father, Ernest Glen Paradis, entered into his eternal life in Heaven with Christ on November 13, 2021, just four weeks after celebrating his 91st birthday. His children and Grandchildren were blessed to be at his side hugging and kissing him as he left this earthly place. Glen was born to Ernest Paradis and Margaret Shaw October 11, 1930 and raised with five siblings in Sunnyside WA. He was also the last survivor of those siblings. Preceding him were brothers Loyal and Wesley; sisters Lorraine Hahn, Arlene Waller and Dorothy Crimin. His youth in the country with his favorite dog Buster was carefree and happy. The memories and stories he told are of the kind of life that no longer exists: Freedom to run around all over after chores are done and don’t show up until dinner, but also don’t be even one minute late! After high school graduation he entered the US Army and served four years. He then married our Mom, his high school sweetheart Shirley Klippert and enrolled in Perry Technical Institute Yakima. They relocated to the Tri-cities in 1959 when he started his long career at Boise Cascade Wallula. They joined Bethlehem Lutheran church and provided all five children with an excellent Christian education at Bethlehem Lutheran School. We are thankful for such guidance and training. Dad was the ultimate DIY guy, if it was broke he’d fix it. If it cost too much, he’d build one. There were usually several projects going on at the same time, and some never were finished! He loved tinkering on fast cars with his son Jon, there was usually a sporty Camaro in the driveway getting upgraded. Growing up, our family vacations were at various Oregon coast locations. Mom and Dad’s dream was to live at the Oregon coast after his retirement. They made it happen and had seven memorable years in Newport OR going beachcombing and sightseeing whenever they wanted. In 2005 they returned to Tri-cities to be near the many Grands and Great Grands. Settling in West Richland in a new neighborhood they became busy doing what they loved: gardening, especially roses. Mom entered repose in 2015, and Dad continued in the house without her, keeping the yard immaculate and working on projects. He kept independent nearly to the end. Glen is survived by his children & spouses: Amy and Dale Selch, Trisha and David Taylor, Noreen and Lance Gagon, Jonathan and Elena Paradis, Wendy and Robert Carlson. Also surviving him is Curtis Morrow, former son-in-law. His Grandchildren are: Conrad and Dustin Morrow, Andrea Cook; Tara Taylor, Emily Christensen; Ariana Drozdova, Alexandra and Gina Paradis; Brendan and Michael Carlson. Here are the names of his 22 Great Grandchildren: Sidney, Owen, Hattie, Audrey, William, Ethan, and Cole Morrow; Shane, Jacob and Oliver Morrow; Grace, Clayton, Benjamin, Samuel, and Gwen Cook; Ethan Taylor; Hailey, Forest, Amelia, and Juniper Hampson; Elon and Annalee Christensen. Infant son Bradley James and beloved wife Shirley preceded Glen in Heavenly Rest. They are now together in Joy. Glen was a quiet, wise, gentle, generous and reliable man. His faith in Jesus Christ was the foundation of all he lived. We miss him dearly and are thankful he was our Dad. May his memory be eternal. There will be a Celebration of Life event in the Spring of 2022. Until we meet again Dear Dad!

Our loving Father, Ernest Glen Paradis, entered into his eternal life in Heaven with Christ on November 13, 2021, just four weeks after celebrating his 91st birthday. His children and Grandchildren were blessed to be at his side hugging and... View Obituary & Service Information

The family of Ernest Glen Paradis created this Life Tributes page to make it easy to share your memories.

Our loving Father, Ernest Glen Paradis, entered into his eternal...