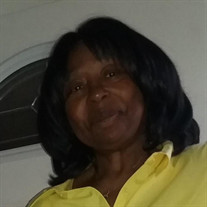 Erma Jean Vaughn, affectionately known as “Jean”, was born Pasco, WA on June 4, 1949 and passed away in Pasco, Washington on September 4, 2021. “Jean” was the third of ten children born to Willie and Minnie(Farrell)Vaughn. She grew up in the city of Pasco, WA where she graduated with the class of 1967 from Pasco High School. She worked as a storekeeper for Hanford and retired after 40+ years of service. Erma loved God, her family friends, and life, which she demonstrated in word and by actions, faithfully. Erma leaves to cherish her memories, one son Malcolm Vaughn(Emma); one daughter, Wynee Bartley; one Goddaughter LaShara Sims; seven grandchildren; seven great grandchildren; four brothers and four sisters; two aunts; and a host of nieces, nephews, cousins, and friends. A public viewing will be held on Friday, September 17, 2021 from 4 PM to 8 PM at Mueller’s Greenlee Funeral Home: 1608 W. Court St., Pasco, WA 99301. A Memorial Service will be held on Saturday, September 18, 2021 from 1 PM to 4 PM at the Howard Amon Park North in Richland, WA. The Burial will be held on Monday, September 20, 2021 at 11 AM at the City View Cemetery 1300 N. Oregon Ave., Pasco, WA 99301. Cards, Condolences, and Flowers may be sent c/o Mueller’s Greenlee Funeral Home.

The family of Erma Jean Vaughn created this Life Tributes page to make it easy to share your memories.