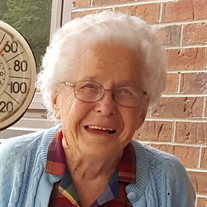 Erma Lea Brammer, nee Taylor, 94, died peacefully in her sleep on May 26, 2021 in Kennewick, Washington. Erma Lea was a much-loved wife, mother, grandmother, great-grandmother and friend. Erma Lea was born October 12, 1926, in Camp Crook, South Dakota to Edwin and Mary (Wiseman) Taylor. She grew up in Carter County, Montana, graduated from Carter County High School and shortly thereafter the family moved to Missoula. Her mother died when she was 16, and when her father died four years later, as the oldest of six children, Erma Lea assumed the responsibility of family finances, and her sister Doris took care of home responsibilities. During her years as a student at the University of Montana she received Christ as her personal Savior. After graduation she taught school for six months and later became a substitute teacher at various schools. On August 27, 1950 she married Gerald (Jerry) LaVerne Brammer. Erma Lea was a busy mother with four children born in three years and three months. She was an avid gardener and canned meat and vegetables. She not only baked all the family's bread, she also baked bread for her neighbors and friends as well. She taught children's Bible classes, did women's visitation, and served as church clerk at Emmanuel Baptist Church in Missoula for over twenty years. When their daughter Virginia developed a nervous system degeneration in her teen years, Jerry and Erma Lea's attitude and response to it helped the family, the youth group, the whole church, and friends come to terms with her illness and death. Erma Lea was a mighty prayer warrior, praying for her family, friends, and many missionaries. She also entertained missionaries often. After the death of her husband in 1980, Erma Lea spent much of the next twelve years serving in Paraguay where she taught missionary children in remote villages. She later lived in Salem, Oregon; Kalispell, Montana; Plains, Montana; Sheldon, Iowa; Williston, North Dakota; Orland, California; and finally, Kennewick, Washington. She was preceded in death by her beloved husband, Jerry; her brother, Wayne and sister, Doris; daughters, Virginia and Lydia; and granddaughter, Sharon. Erma Lea is survived by her sister, Reva; two brothers, Ivyl and Carl; three sons, Dan, David, and Art; grandchildren, Lisa, Lori, John, Teresa, David, Travis, Tacie, Mark, and Joy; and fourteen great-grandchildren. Erma Lea has left her family a rich legacy of serving God and others. Her faithfulness to God and his work inspires us to pass on that heritage to those who come behind us.

The family of Erma Lea Brammer created this Life Tributes page to make it easy to share your memories.