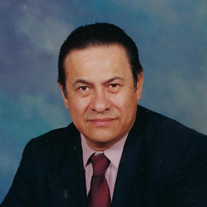 Dad started from humble, happy and loving beginnings. Born in August of 1945 in a small canyon town on the outskirts of Ojinaga, Chihuahua Mexico. He grew up on a family farm living with his grandparents, aunts & uncles, His cousins Miyo, and... View Obituary & Service Information

The family of Eliacer Zuniga Silva created this Life Tributes page to make it easy to share your memories.

Dad started from humble, happy and loving beginnings. Born in...