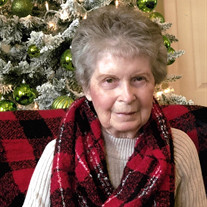 Edris E Ralls went to heaven peacefully surrounded by her family February 9, 2020. She was 89 years old. Edris was born August 24, 1930 to Rosa and Albert Norton in paradise Oregon where she was raised on a ranch and taught to love God, family, work hard and do unto others as you would have done unto you. After graduating high school 1 year ahead of schedule, Edris married Buell "Jack" V Ralls and began her life of travel and raising 4 children. In 1965 Edris began Tri-City business school which led her to a career in Law Enforcement. She was the 2nd female to be hired as a Police Matron in Pasco Washington which led to her attending the Police Academy, assisting in raids, police work and later to become the Administrative Assistant to the Police Chief in Pasco and retired after 20 years. Her picture remains in the Pasco Police Department at this time. She enjoyed her family, music, square dancing, round dancing, friends, walking and playing pinochle. Edris believed in treating "your neighbor as you wanted to be treated"; she treated everyone with kindness and believed the best in everyone. Edris enjoyed her children, grandchildren and great grandchildren and each one of them knew she loved them and always encouraged them to work hard, love much and do their best. She wrote her memoirs and her final statement was " I love my family very much". After her "Prince Charming" Buell died, she enjoyed the companionship of Terry Shegrud, her friend and dance partner. Edris is survived by sons Jerry Ralls, Santa Clara Ca and Dan Ralls Coeur d'Alene ID and daughter Linda (Ralls) Ingersoll Kennewick WA, 10 Grandchildren and 18 Great Grandchildren. She was preceded in death by Buell (Jack) Vern Ralls- Husband, Judy E Ralls her daughter and Connor Ralls her grandson. Even while sick, she was always kind, said thank you and cared about all those around her. The family wishes to thank Fluer d Lis AFH and Chaplaincy Palliative and Hospice care for assisting her loved ones in making our Moms final days happy and well cared for. Services will be held at Mueller's Tri-Cities Funeral Home at 1401 S. Union Street in Kennewick with Viewing on Friday, February 21, 2020 from 4-8 PM and the Funeral Service on Saturday, February 22, 2020 at 1 PM.

Edris E Ralls went to heaven peacefully surrounded by her family February 9, 2020. She was 89 years old. Edris was born August 24, 1930 to Rosa and Albert Norton in paradise Oregon where she was raised on a ranch and taught to love God, family,... View Obituary & Service Information

The family of Edris E Ralls created this Life Tributes page to make it easy to share your memories.