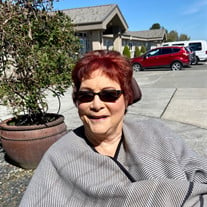 Edith "Edie" Ann Jones Wattenburger passed away peacefully into the arms of her loving God on April, 29, 2022 surrounded by her family. She was born on November 27, 1942 to James and Muriel Peach in Chewelah, WA and grew up in Spokane, WA until she met and married Chris Jones. Chris and Edie farmed in the Snake River junction area until Chris went to seminary. They moved their family to Salem, OR and then to Brookings, OR to pursue ministerial education. In 1977, they moved back to the Tri-City area to start a church and spread the word of God. Soon after Chris' unexpected death in 1980, she met and married Raymond Duane Wattenburger. They resided near the Columbia River for over 30 years where they enjoyed hosting many boat race gatherings. Edie enjoyed working with the flowers and delighted in the customer interactions while working at Columbia Grain and Feed. Edie was actively involved in many organizations. She was a past member of Children's Orthopedic Hospital, one of seven individuals who started the Tri Cities Cancer Center Guild, member and past president of Cancer Center Guild, member of Columbia Bible Church, member of Chapter GF of PEO, and 25 year member of Star Grange. She supported many educational, sports and musical school activities with her kids and grandkids. Edie found enjoyment in monthly lunch dates with her friends, decorating for many community functions, and delighted in making poems, notes and cards to celebrate people. She also enjoyed making Edie's Gourmet Almond Brittle for gifts and started to pursue selling Almond Brittle professionally. In 2010, Edie had a car accident which left her a quadriplegic. Despite this tragic accident, Edie remained strong, resilient, and positive, spreading sunshine and hope in all her personal encounters. In 2015, Edie transitioned to Fleur de' Lis Adult Family Homes which provided the best level of care for her condition. Special thanks to the staff at Fleur de' Lis where they became Edie's extended family for the past seven years. Throughout her years as a quadriplegic, Edie experienced many health challenges yet was always able to bounce back from them. She ultimately succumbed as a result of septic shock and pneumonia. Edie's smile and vivacious personality will be missed by many. Edie was preceded in death by her first husband Chris Jones and is survived by her sisters Judy O'Brien and Vicky (Dave) Brugger; her children Julie (Darrell) Goeckner, Jeff (Janie) Jones, Jill (Todd) McColloch, Jodi (Josh) Romaine; step children Kim Gehard (Robert), Kevin (Jill) Wattenburger, and Robyn Barness; her grandchildren - Charles (Jamie) Goeckner, Chris (Shannon) Goeckner, Nathan (Alyssa) Jones, Harrison Jones, Bennett Jones, Gracyn Jones, Faith Romaine, Zeke Romaine, Emmily (Jake) Kirkpatrick, Sara (Garrett) Wiltz, Haylee Barness, Zach (Desirae) Barness, Nicholas Barness, Harper Barness, Caitlin Fillion, Kayla (Adam) Jones, Travis Fillion, Jarrett Wattenburger, Izzi Wattenburger; and numerous great grand-children. Edie also wanted to recognize wonderful sister-in-laws Connie (Gene) Russell, Maxine (Chris) Rhoads, Carolyn (Gene) Wattenburger, Noreen (Fred) Wattenburger, and Barb (Paul Lynn) Wattenburger. A celebration of life service will be held on Thursday, May 5th at 2pm at Mueller's Tri-Cities Funeral Home in Kennewick, WA. In lieu of flowers, contributions can be made to Tri-Cities Cancer Center.

Edith "Edie" Ann Jones Wattenburger passed away peacefully into the arms of her loving God on April, 29, 2022 surrounded by her family. She was born on November 27, 1942 to James and Muriel Peach in Chewelah, WA and grew up in Spokane, WA until... View Obituary & Service Information

The family of Edith (Edie) Ann Wattenburger created this Life Tributes page to make it easy to share your memories.