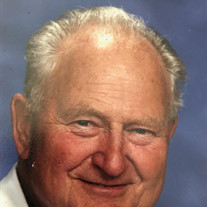 Earl Root, born July 29, 1928 in Greeley, Colorado, passed away peacefully at home on Sunday, May 24, 2020 at the age of 91. Earl was in his early teens when his family relocated to Washington in the Yakima Valley. He worked with his two brothers and 2 sisters on local farms picking hops, apples and cherries. Earl was drafted by the Army and served his country as a machine gunner in Korea. He was burned severely when a kerosene heater exploded in his tent quarters. He spent three months in Japan at a burn hospital before returning stateside to endure months of rehabilitation and physical therapy. Earl started working at Hanford in 1955 as a patrolman. He moved from his farm in Moxee to Richland to be closer to work and that is where he met the love of his life, June Reisig in March of 1957. Earl and June were married in August of that same year. They soon moved to Kennewick where they raised their family of 3 boys. Earl switched jobs in 1960 to work as a Millwright. He was a member and president of Local 2403 Carpenter and Millwright Union until his retirement in 1988 after 33 years of service. Earl bought ten acres of asparagus in Kennewick as he was a farmer at heart. He had an incredible green thumb. The family worked the asparagus field for years and gradually planted an apple orchard, raised cattle and built a house on the land. Earl planted a half acre garden and it provided a bounty of produce for family, friends and neighbors. He loved taking his golden delicious apples and garden vegetables to the Pasco Farmer's Market, where he enjoyed visiting with other vendors and customers. He also sold his apples from the house and was proud of how many people would come back year after year. Earl was a member and Past Master of the Richland Masonic Lodge where he made many lifelong friends. Earl enjoyed fishing and hunting and taught his sons a love of the land. He took great pleasure in spending time with his family, especially his grandchildren. Earl is survived by his wife June. Sons, Eric (Claudia), Paul (Barb), and Neil (Caryn). His grandchildren Kyle, Laura and Luke, and many nieces and nephews. Due to the current COVID-19 restrictions there will only be a graveside service for family, with a memorial to be held at a later date.

Earl Root, born July 29, 1928 in Greeley, Colorado, passed away peacefully at home on Sunday, May 24, 2020 at the age of 91. Earl was in his early teens when his family relocated to Washington in the Yakima Valley. He worked with his two brothers... View Obituary & Service Information

The family of Earl Root created this Life Tributes page to make it easy to share your memories.