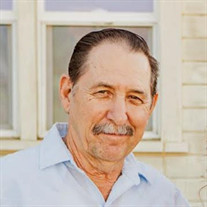 Earl D. Lunders was granted his final wish on March 11th, 2022, spending his last moments in his home surrounded by people who loved him. Earl was born February 8th, 1943, in Ruebens, Idaho to Mary and Garrett Lunders. He moved to Pasco where he graduated high school and met his wife, Donna Hickman. He took her out for ice cream and dancing, and they married on October 2nd,1965. Earl became a father of four and a grandfather to many. He ran a strict household in hopes of shaping kids, whom he endearingly called “brats”, into fine adults. He loved to encourage his kids and grandkids to play sports and enjoyed attending their games. He was the type of person who once determined, got something done. He raised rabbits and poultry with his children and later tended a pack of chickens with his grandchildren. Earl had a green thumb like no other—green beans, peppers, and tomatoes fresh from “Grandpa’s Garden” were always the freshest and most delicious. Earl loved the Mariners but would tell you they stink if they were having a bad season. He knew how he liked his eggs at breakfast, and he’d always take the top slice of French toast, even though it was the thermal blanket for the stack. Earl was talented at training dogs and spent a lot of time working with his border collie “Little Anne.” Frequently taking her on walks, they once attracted the local newspaper at a park where Annie was pictured going down the slide with one of Earl’s grandchildren, Shane. He loved to share ice cream with his grandkids after a late- night walk and always had gummy worms stocked next to his chair to share. He is survived by his wife, Donna, his children Lana Rockwell, Garrett Lunders, Darsey Withrow (Sean), Derek Lunders, Brothers Pete (Judy) and Jim (Karen) Lunders, and Sister Cecelia Kensey Survived also by grandchildren Ashley and Dakota Rockwell, Autumn Lunders, Kassandra and Megan Withrow, Shane Lunders, Cameron Smith, Christopher, Joseph, Johnathan, Conner, and Morgan Lunders. His funeral will be held on Saturday, April 2nd at 1:00 PM at Mueller’s Greenlee Funeral Home with a reception to follow at the Richland Community Center-- 500 Amon Park Drive, Richland WA.

Earl D. Lunders was granted his final wish on March 11th, 2022, spending his last moments in his home surrounded by people who loved him. Earl was born February 8th, 1943, in Ruebens, Idaho to Mary and Garrett Lunders. He moved to Pasco... View Obituary & Service Information

The family of Earl Delbert Lunders created this Life Tributes page to make it easy to share your memories.