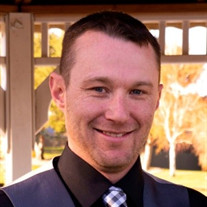 Aug. 13, 1979 - Mar. 17, 2020 Dylan was born in Portland, Maine to parents Jeffrey Lee Berry and Dorothy Michelle Berry. At nine months old the family moved to the San Francisco Bay area. Growing up there Dylan enjoyed boating, camping, fishing, and especially attending the 49er football games and SF Giant's baseball games with his father! He was an amazing baseball player, T-ball to Pony League, excelling at pitching and centerfield as he could throw a 90 mph fastball and throw out people from centerfield. His dad coached many of his teams and his parents attended every game. Dylan worked at a riding stable as a teenager and his love of horses began. Years later he broke and trained "Sadie" a young quarter horse that stole his heart. Dylan loved his country and did a stint in the U.S. Army, enrolling shortly after 911. He was a hard worker, working many jobs over the years including construction and warehouse jobs. He joined CREST Logistics (contractor for Union Pacific) where he rapidly ascended from warehouse to Safety Supervisor and had just been offered a management position. He was instrumental in and working on setting up new company safety procedures nationwide. Dylan had a huge heart and he loved big. He gained a stepmother, Kathy, and a new sister, Katrina, when he was 15. He fell in love with baby Katrina and never stopped, always so proud and supportive of her. The family moved to Kennewick, WA in 1995. Dylan found what he always had been looking for when he found Heather McClain and her children, Malachi and Ellee - a family of his own. He was an amazing husband and father and loved them unconditionally. He was a true friend, always there to help, support, lend a hand or a huge smile. He will be missed greatly along with his legendary enthusiasm for the SF 49ers, the Giants, the Boston Red Sox (5th generation fan) and his wicked sense of humor. He left us too soon, to join his Heavenly Father, due to an undiagnosed heart condition. Dylan is predeceased by his mother, Dorothy (Adams) Berry. He is survived by his parents Jeff and Kathy Berry, wife Heather McClain Berry and stepchildren Malachi and Ellee, his sister Katrina Lee Berry along with a multitude of beloved in-laws, aunts, uncles, cousins, nephews, nieces and dear friends. A Celebration of Life service will be held later when circumstances allow.

The family of Dylan Jeffrey Berry created this Life Tributes page to make it easy to share your memories.