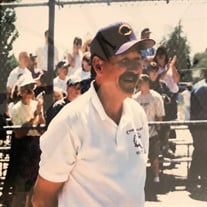 Dwight Arlington, age 73, of Kahlotus WA passed away on June 4th 2020 in Connell WA. Memorial services will be held at Muellers Greenlee Funeral Home in Pasco, WA on 6/20/20 at noon. Due to the Covid-19 pandemic, attendees are limited, but the service will be made available to view online. Some arrangements and social media…….has been created by former players…. Dwight was born in Ada Ohio to Harold “Harry” and Maxine (Howard) Arlington on June 15th, 1946. He graduated from high school in Carey Ohio. After serving in the army, a brief stint with Burlington Railroad and playing basketball at Columbia Basin College, he went on to earn his K-12 teaching certificate at Eastern Washington University. He worked as an educator for the North Franklin School District his entire teaching career. He taught at all of the schools in Connell, starting at Connell Elementary, moving to Olds Jr. High, and finally ending his career at Connell High School. He taught a variety of subjects that included social studies, woodshop, and P.E., to name a few. Mr. Arlington also worked as Athletic Director and Vice Principal at CHS for a short period of time before returning to his passion, the classroom and the practice fields. It was here that he made his greatest impact on his students and athletes; he was the ASB advisor for a number of years, he won 5 state championships in softball, his basketball teams often trophied at the state tournament, and each day he earned the admiration and respect of his students and colleagues. He was awarded several coaching awards and accolades for his accomplishments and years of service as in education. Being an Ohio country boy, he also had a passion for hunting, fishing and Woody Hayes. His favorite hobby was to spent time with his close friends at the river or by a bond fire, enjoying the outdoors and a cold beer. Dwight was preceded in death by his father and mother Harold and Maxine, three brothers: Burt Arlington, Harry D. Arlington and Arnold Arlington, a sister: Rebecca Russell and a nephew: John D. Arlington. Dwight is survived by sons Jeff Arlington of Connell WA, and Todd Arlington of Kennewick WA, grandsons Tyler, Trey, and Tanner Arlington, and granddaughter Destiny Price. Also surviving are two brothers, John “Jack” Arlington of Seale AL, and Jerald Arlington of Melba ID, and three nieces, Lee Ann Hall of Melba ID, April (Khris) Risner, of Lima OH, and Paula Hoffman of Ada OH. Memorials (donations) may be given to……. (Connell Eagles Nest)

Dwight Arlington, age 73, of Kahlotus WA passed away on June 4th 2020 in Connell WA. Memorial services will be held at Muellers Greenlee Funeral Home in Pasco, WA on 6/20/20 at noon. Due to the Covid-19 pandemic, attendees are limited, but... View Obituary & Service Information

The family of Dwight Mitchell Arlington created this Life Tributes page to make it easy to share your memories.

Dwight Arlington, age 73, of Kahlotus WA passed away on June...