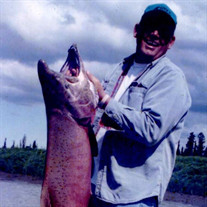 Duane Mac Shepard January 26, 1951 - June 13, 2021 Duane Mac Shepard of Richland passed away on June 13, 2021 in his home at the age of 70 years. A graveside service to honor Duane will be held on Friday, June 25, 2021 at 10:30 a.m. at Desert Lawn Memorial Park. Duane Mac Shepard was born on January 26, 1951, the son of Vivian and Howard Mac Shepard in Pasco, Washington. Duane attended and graduated from school in Burbank, Washington. He raised his two children and played an active role in the lives of his grandchildren. He spent his work career as a carpenter and a general superintendent for Max J Kuney. Much like his line of work, Duane spent his years building a life to be proud of. He was a loving father, grandfather, brother, and friend to so many. Duane was well known for his great sense of humor, generosity and love for his close friends and family. He was an avid hunter and fisherman that loved spending his time fishing for Marlin and vacationing with family in Mexico. Duane is survived by his children: Richard (Sondra) Shepard of Weston, OR, Dawn Shepard of Bend, OR; his grandchildren Aaron (Jordan) Shepard, of Weston OR; Keegan Shepard of Pasco, WA; great-grandchildren Quintin Mac and Abigail Shepard; and his siblings Dennis (Hazel) Shepard of Burbank, WA, Karyle (Larry) Ferrians of Vancouver, WA, and Shelia (Howard) Russel of Milton-Freewater, OR. He was preceded in death by his parents and sister Maxine Horn.

The family of Duane M Shepard created this Life Tributes page to make it easy to share your memories.