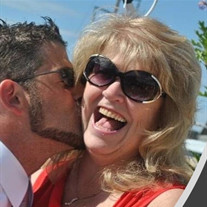 DRUCILLA ANN HAMMOND Dru (Dixon) Hammond, 67, of Kennewick, WA, passed away on February 5, 2021 with her husband of 45 years by her side. Dru was born on December 11, 1953 at Maynard Hospital in Seattle, WA to Thomas and Barbara Dixon. Dru graduated from McCall-Donnelly High School in 1972 and attended college at the University of Idaho. Dru married Roy Hammond on August 16, 1975. Dru and Roy lived most of their life in Kennewick, WA for the past 42 years. Dru worked in the Hanford area as a phone operator and safety coordinator. Dru is a loving wife, mother, grandmother, friend, leader, and hockey mom to many. Her life's work is her passion and commitment to everything hockey. Dru is "hockey" to anyone who knows her and a hockey mom to countless boys and girls, instrumental in their growth as young men and women in our community. Dru is a pillar of the local hockey family and a founding member of Tri-Cities Amateur Hockey Association (TCAHA). She has been a steadfast volunteer since its formation in 1988. Dru also held two terms as the Pacific Northwest Amateur Hockey Association (PNAHA) President as well as the USA Hockey Association Pacific District Director. Dru paved the way for many hockey programs in the Tri-Cities, Washington, and the Pacific Northwest. Roy and Dru opened their hearts and home to many Tri City American hockey players as their billet family. She is a true 'Hockey Hero', a "Beauty", and will be held highest in all hockey hearts. Dru is a fierce advocate for all hockey across the state and country and a champion for women's hockey. There are countless hockey families she has helped and touched who's gratitude for her legacy and hard working efforts will never be forgotten. Dru always does the right things for the right reasons, she worked tirelessly for the kids. Volunteering even long after her boys were done playing and through the years of her grandchildren playing the game she devoted her life to. Dru created so many hockey mile memories in her travels with her boys and her hockey friends. Her legacy will live on as every skate lace is tightened and blade steps on the ice. Dru demonstrates strength and inspiration to those around her. Her incredible energy and endearing personality lights up the room. At the age of 17, Dru was Miss Valley County Fair Queen in McCall, ID in 1971. While attending the University of Idaho, Dru was a member of Beta Sigma Phi. Dru had a perfect itinerary for every trip or adventure, she was the best coordinator. One of the most memorable trips was to Maui with her friend and neighbor of 41 years, John and Judy Osborn. Dru loves her little schnauzers, Cricket and Dakota who gave her comfort for many years. Most recently, you can find Dru in the casino at the penny slots, so every time you sit down to pull that handle, know she will be just behind your shoulder cheering you on. Dru gave birth to her three sons, Ross in 1977, Ryan in 1980, and Kiel in 1982. Dru's pride and joy second to her own boy's are her grandchildren, Dylan, Lincoln, Jackson, Makenzie, Gracie, Kole, and Kane. Dru is survived by: her husband, Roy Hammond. Her son Ross Hammond and his children, Dylan and Lincoln; Ryan (Nicole) Hammond and their children Jackson and Gracie; Kiel (Ashlee) Hammond and their children Makenzie, Kole, and Kane, all of Kennewick, WA. Her mother-in-law, Betty Hammond of Moscow, ID, In-laws, Larry (Becky) Hammond of Moscow, ID; Steve (Harriet) Hammond of Moscow, ID; Niece Tracy, and Nephews Chris, Sean, Mark, and DJ; Her stepfather Gary Smith of Pollock, ID; Brother Tom (Patty) Dixon of Riggins, ID; Sister Kim (Monte) Hawks of Pollock, ID, Nephews Gary Dixon and Joshua (Erika) Hawks. She was preceded in death by her mother Barbara Day Smith, father Thomas Dixon, and her father-in-law Wayne Hammond. As an expression of sympathy, memorial contributions may be sent to Tri-Cities Amateur Hockey Association (TCAHA) in the name and honor of Dru Hammond. A reception to celebrate Dru's life will be held at a later date.

DRUCILLA ANN HAMMOND Dru (Dixon) Hammond, 67, of Kennewick, WA, passed away on February 5, 2021 with her husband of 45 years by her side. Dru was born on December 11, 1953 at Maynard Hospital in Seattle, WA to Thomas and Barbara Dixon. Dru... View Obituary & Service Information

The family of Drucilla Ann Hammond created this Life Tributes page to make it easy to share your memories.