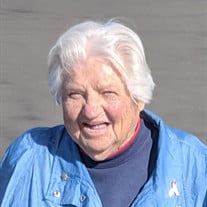 Dorothy Scharnhorst Sanders was born in Holden, Missouri on July 21, 1925 to Roy and Florence Scharnhorst. The family moved to Nebraska when she was three years old and Dorothy attended school in Kimball, Nebraska until third grade. Her father worked on the railroad and was transferred to Wyoming. Dorothy graduated from high school in LaGrange, Wyoming. Dorothy enjoyed sports in her early days and also music. She played the snare drums in the marching band and the trap drums in orchestra. She also loved to dance. She met her husband, Kenneth, in LaGrange in 1945 and they married in September of that same year. He had served and been injured in World War II, receiving the purple heart and was returned home to his love, Dorothy. Dorothy and Kenneth had four children. They are Kenneth (Sandy), Larry, Michael and Karen. Dorothy loved children and ran a daycare in her home for almost 30 years. She took care of an average of eight children a day and claimed that she had a total of 380, altogether. She was proud to have pictures of many of them. Some of Dorothy's favorite activities were to ride horses and toboganning in the early days. In the later years, she bowled on a team and played cards and Bingo. She, of course, loved having her children and grandchildren around. When Kenneth and Dorothy retired, they spent much time fishing and camping. Their favorite spots were Keller Ferry and Williams Lake. They also enjoyed their trips to Hawaii, Georgia, Wyoming and California. Dorothy was able to realize her childhood dreams of visiting Hawaii and taking care of children. She felt that she had lived a wonderful life. Dorothy is survived by her sons, Kenneth (Sandy), and Michael, and her daughter, Karen. She also has a brother, Wayne, who lives in Georgia. She has nine grandchildren and many great-grandchildren. Dorothy was preceded in death by her husband, Kenneth E., and her son, Larry K. Sanders. She was able to take care of Larry in her home for eight years before he passed. Her brothers, Oscar, Dale and Roy Scharnhorst also preceded her in death as well as her sister, Norma Jean Anderson. Dorothy lived a long and full life. She reached the age of 96 and continued in good health until the day she went home. Her family and friends will miss her, but feel very blessed that they were able to share in her life for so many years. We love you, Dorothy Scharnhorst Sanders! There will be a memorial service at 11AM on Friday, December 10, 2021 at The Living Room Church.

Dorothy Scharnhorst Sanders was born in Holden, Missouri on July 21, 1925 to Roy and Florence Scharnhorst. The family moved to Nebraska when she was three years old and Dorothy attended school in Kimball, Nebraska until third grade. Her father... View Obituary & Service Information

The family of Dorothy Genieva Sanders created this Life Tributes page to make it easy to share your memories.

Dorothy Scharnhorst Sanders was born in Holden, Missouri on July...