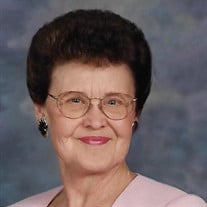 Dorothy Feil (age 90) peacefully passed into heaven January 8, 2022 after a short battle with pneumonia & Covid-19. She was born April 9, 1931 in Gering, Nebraska to Carl and Eva Fertig. Dorothy attended & graduated Kennewick High School in 1949. Following graduation she met the love of her life, Walter Feil, at a Dutch Hop dance who she married and spent the next 68 years with. They were blessed with one child, Randall, in 1951. In 1955, the family moved to Renton, Washington, then in 1960 they settled in Kennewick. Along the way, Dorothy worked for the phone company then attended beauty school and eventually opened her own beauty salon in downtown Kennewick. While raising their son, Dorothy and Walter enjoyed many fishing trips with friends and numerous trips to Hawaii. She loved gardening & flowers, and devoted herself to her pristine home garden & immaculate yard. She spent hours at the sewing machine making clothes for all her grandkids, crocheting beautiful afghan blankets, cooking countless family dinners, baking delicious treats for all, and last but not least, canning. Dorothy is preceded in death by her parents, Eva & Carl Fertig; sister, Arlene Schaffer; and loving husband, Walter Feil. She is survived by brothers, Marlin Fertig (Cheryl) of Sequim, WA and Jim Fertig of Kennewick, WA; son, Randy Feil of Kennewick, WA; and numerous nieces & nephews. She also leaves behind grandkids: Renee Rodriguez (Jesse) of Richland, WA; Ryan Feil (Alma) of Pasco, WA; Robyn Feil of Richland, WA; great-grandkids: Forrest Rodriguez, Isiah Rodriguez, Xander Feil, Kensie Feil, and great-great-granddaughter Demri Rodriguez. The family would like to give a heartfelt thanks to her amazing caregivers that made it possible for her to remain in her home following Walter's death. You are all loved and deeply appreciated. A Viewing will be held Monday, January 17, 2022 from 4PM - 8PM at Mueller's Tri-Cities Funeral Home with a Graveside Service Tuesday, January 18, 2022 at 2PM at Desert Lawn Memorial Park.

The family of Dorothy Jane Feil created this Life Tributes page to make it easy to share your memories.