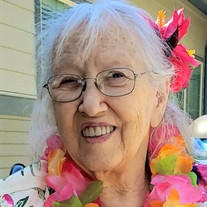 Doris Hallquist Barrett (nee Doris LaVerne Blair), 93, of Kennewick, Washington, left this earth at 12:15am Thursday, February 4, 2022 after a short bout with covid-19. Born May 11, 1928, in Whittier, California, Doris was the third of five children born to the late Edmund Henry and Elizabeth Maybell (Puckett) Blair. Doris was a passionate Christian believer and wanted nothing more than to share her faith with others. At an early point in her life, she wanted to go to China as a missionary and entered Central Bible College of the Assemblies of God in Springfield, Missouri with that goal in mind. While attending that school, in 1949, the Communist Party declared full control of the country and closed its doors to any outside influence. Doris was at a loss as to what to do. She ended up dropping out of college and traveling with an evangelist for a time while seeking the Lord's guidance for her life. Eventually, she met the late Robert (Bob) Arnold Hallquist, marrying on December 31, 1953 (in order to get the tax deduction that year). They were married just short of 56 years at the time of Bob's passing. Bob and Doris were in the ministry for about 60 years pastoring churches in Maryland, North Carolina, Ohio and Connecticut, and in their later years, interim pastoring in Pennsylvania, Maine, and Martha's Vineyard, Massachusetts. In between full-time pastoring and later interim pastoring, Doris served as Bob's travel companion for 14+ years as he served as the Northeast Publishing Representative for the Assemblies of God's Gospel Publishing House. During these times of ministry, Doris served in a variety of ways, always serving others, her passion. She was a consummate student of the Bible and developed her teaching skills through the years as a Sunday School teacher of children and adults, as well as being a teacher at women's retreats and conferences. Arvel Barrett and his late wife, Irene, had pastored not far from Bob and Doris' home in Fayetteville, Pennsylvania. Doris and Arvel became reacquainted at Bob's memorial service. Over the next number of months, they spent a good amount of time on the phone as Arvel consoled Doris during her time of grief. The relationship between the two grew into something very special and, at the ages of 82 and 92, married on July 10, 2010. The had just less than three years together when Arvel passed away and loved and honored each other every minute of their time together. The other passion of Doris' life was her family. She said frequently, "I guess one never stops being a mother" and she meant it. As long as she was able, she would spend many long hours on the phone with her adult children and grandchildren, sharing her Godly wisdom for the benefit of their lives. Doris is survived by three of her four children: Shea Blair Day of Jerome, AZ., David Hallquist of Chambersburg, PA., and Christine Bauer (Roy) of Kennewick, WA and her daughter-in-law, Amy Visciglia of New London, CT. Her oldest son, Stephen Arnold Hallquist predeceased her by four months. She is also survived by two siblings, Donald Blair (Teresa) of Tyler, TX and Wayne Blair (Judy) of Van Buren, AR. Doris' heritage reaches to a multitude of biological and step-grandchildren and great-grandchildren, nieces and nephews and many honorary family members who live across much of the United States and beyond. Doris' family want to thank all the staff at Windsong at Southridge, Montessori Memory Care for their love and excellent care of Doris over the last almost year. When Doris moved there this past year, we knew she was where she needed to be for however long she would live. They cared for her deeply and loved her and we know will miss her. We believe that they will reap the same kind of caring and concern in their own lives as they have sown into those for whom they care. Although family argued with her multiple times over this, Doris was adamant that she wanted neither a funeral nor a memorial service in Washington State where she spent her last almost six years, nor in Pennsylvania where she lived a substantial portion of her life. She will be buried with Bob at Indiantown Gap National Cemetery in Annville, Pennsylvania on Friday, March 11, 2022, at 11:00am. In lieu of flowers, please consider a memorial donation to any of the following three ministries, each of which was special to Doris personally: -Teen Challenge, specifically the Teen Challenge of the Smokey Mountains (https://mtcots.com/ ) which is located in Franklin, North Carolina at the site of the former Cullasaja Campgrounds where the family had a 2-room cabin and vacationed almost every year. -The Assemblies of God Missions Department, specifically their China ministries - Convoy of Hope https://convoyofhope.org/

Doris Hallquist Barrett (nee Doris LaVerne Blair), 93, of Kennewick, Washington, left this earth at 12:15am Thursday, February 4, 2022 after a short bout with covid-19. Born May 11, 1928, in Whittier, California, Doris was the third of five... View Obituary & Service Information

The family of Doris Hallquist Barrett created this Life Tributes page to make it easy to share your memories.