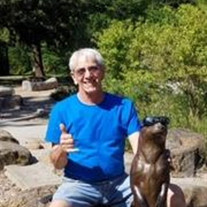 On Sunday, February 16, 2020, Dorian A. Desparte passed away at the age of 72. Dorian was born March 16, 1947 in Chicago, Illinois to Dorene and Anthony Desparte. He graduated from St. Mel's High School in 1965. He attended the Electronics Engineering Technology Program at Coyne Electronics Institute before entering the Air Force in 1967. While in the Air Force he served in three career fields including Civil Engineering. After the Air Force, Dorian finished his Associates in Arts degree in 1977 and his Associates of Applied Science in Electronics Technology in 1979. He also completed his certificate as a Master Electronics Technician in the 1979. After completing his schooling, he worked for the City of Richland as a Civil Engineer. In 1981, he began work at the Hanford Nuclear Reservation as a Communications Specialist. He worked for Hanford for 34 years before retiring in 2011. Dorian met his first wife Mary Etta Robinson in Spokane, WA. They were married in 1970 and were blessed with their son Devin Anthony. And though, Dorian and Mary went their separate ways in 2002, he deeply cared for Mary and would do whatever he could to help her. Dorian met Christine Ann Kinne while attending a dance class. They were married in 2003 and he inherited Tawna Marie, Jeremy Lyn, Markus Allen, and Kenna Marque. He loved them as if they were his own. He adored all of his grandchildren, Lucas, Isabella, Zaiden, Gavin, Taylar, Nova and Aliah. Dorian had a passion for trains and would spend hours planning, building, and working with his HO scale trains. He would travel by train at any given opportunity. He also had a passion for dancing of any kind. One of his favorite dances was the Cha-cha. His love of dance was great enough that him and Chris installed a dance floor in their home so they could dance whenever they wanted. He had a passion for the outdoors and loved to ski and golf. He also had a love of motorcycling including riding the trails with his son Devin. He was an avid bowler and bowled on several leagues. He also loved to play the accordion though he did not share that passion with many and would keep his playing time to himself. Dorian loved to learn new skills and excelled at anything he put his mind and hands to. Dorian is preceded in death by his parents, Anthony Salvatore and Dorene (Tromblay), former sisters-in law Janice Robinson, Lisa Robinson, Lyn Roberson, and Theresa Roberson. He leaves behind his wife Christine, his children Tawna, Jeremy and partner Sarah, Devin and wife Angela, Markus, Kenna, and his seven grandchildren.

On Sunday, February 16, 2020, Dorian A. Desparte passed away at the age of 72. Dorian was born March 16, 1947 in Chicago, Illinois to Dorene and Anthony Desparte. He graduated from St. Mel's High School in 1965. He attended the Electronics Engineering... View Obituary & Service Information

The family of Dorian A Desparte created this Life Tributes page to make it easy to share your memories.