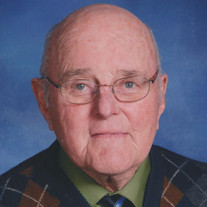 (1922-2020) Don passed peacefully at home on July 29, 2020 in Burbank, Washington. Don filled his 98 years of life with optimism, conviction and love. Born and raised in California to parents Rae and Isabel, he completed BS in Agriculture 1947 at California State Polytechnic (CalPoly). His schooling was interrupted by his service during World War II where he served in the US Coast Guard. While in the Coast Guard, Don met Vivian, who would be his wife of 40 years. They moved to Lancaster, California where they grew their family expanded to 5 children and Don taught high school vocational agriculture. In 1955 the family settled on a farm in Warden, Washington. Notably this farm began as a pioneering effort clearing the property of sagebrush as part of the Columbia Basin Project. Don and Vivian grew the farmlands, ultimately acquiring property in Wallula, Washington where farmed with family members until retiring at the age of 87. Don had a well-developed love of travel, visiting many wonderful foreign countries, as well as a sense of community service participating in agriculture organizations and Rotary. After Vivian's passing, Don found a second partner in Eunice, and together they shared many of the same joys for the next 22 years. Don is preceded in death by Vivian, in 1986, and then Eunice, in 2013. Don is survived by all five children: Thomas, Donna, Paul, Mary Johns, and Brian, 15 grandchildren, and 21 great-grandchildren. A private internment will take place at Wallula Cemetery. Don's family is especially grateful to Home Care Solutions for their compassionate care in recent years. Donations may be made in his honor to any charity of choice.

(1922-2020) Don passed peacefully at home on July 29, 2020 in Burbank, Washington. Don filled his 98 years of life with optimism, conviction and love. Born and raised in California to parents Rae and Isabel, he completed BS in Agriculture 1947... View Obituary & Service Information

The family of Donald Byron Worden created this Life Tributes page to make it easy to share your memories.