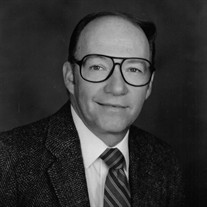 Donald Lee Patton, a lifelong resident of Franklin County died March 6th, at the age of 84. Don passed away surrounded by his family in a room filled with love, laughter, tears and gratitude. Don was a loving, caring and proud father, grandfather and great-grandfather. His sense of humor and zest for life will be greatly missed by many. Donald was born October 12,1935 to John and Retha Patton in Pasco, WA. Don along with his sisters Leola and Viola were raised on the family wheat farm near Kahlotus, WA. Eventually, while still attending Connell High School he took over Haywire Ranch and he and his wife Cheryl raised their four daughters; Jill, Amy, Paige and Kerry on the family farm. In 1978, Don and Cheryl were blessed with an exchange student from Ghana, Ekua Ollennu who became a 5th daughter and a beloved member of our family. Don served on Big Bend Electric Board of Directors for 23 years and he served with the Franklin PUD for 6 years. He was awarded the "Life Award" by Northwest Public Power Association. Don also served on the Connell School Board for many years and he was active in numerous Democratic Political Campaigns. Many of you, undoubtedly have had political conversations with Don! Don's true passion was travel and meeting people from around the world. He took his first trip to Russia in 1963. Then in 1970 he led his first agri-tour to Russia. He also led tours to China, Italy, Australia, Africa, India, Belgium, Poland and at least a dozen other countries. He even visited Timbuktu. Donald had an adventuresome spirit and he loved meeting new people and learning about their cultures. Don made life fun. His daughters and grand-children referred to his home as their "clubhouse". It was a place you could go and talk freely, share ideas and know you were heard and loved. Donald L. Patton is survived by: Jill Falkner, Amy and Dave Campbell, Paige and Chris Morris, Kerry and Gregg Koelzer, Ekua and Ashitei Ollennu and 7 grandchildren: Marlo and Greg Bosch, Nick and Victoria Mackay, Joshua Morris, Bradi and Pat Sullivan, Katy and Gaets Michel, Megan Koelzer, Jacqueline Koelzer and 2 great grandchildren: Eliza and Magnolia Bosch. His service will be held Saturday, March 14th at Mueller's Greenlee Funeral Home, 1608 W Court Street, Pasco, WA at 10:00 A.M. Donald's family would like to extend a special thank-you to the following people for all of their love and assistance with Donald while he was ill: Dr. Charles Kruase, Dr. Jim Campbell, Romero Cardenas, Chaplaincy at Hospice and Fleur De Lis adult family homes.

Donald Lee Patton, a lifelong resident of Franklin County died March 6th, at the age of 84. Don passed away surrounded by his family in a room filled with love, laughter, tears and gratitude. Don was a loving, caring and proud father, grandfather... View Obituary & Service Information

The family of Donald Lee Patton created this Life Tributes page to make it easy to share your memories.