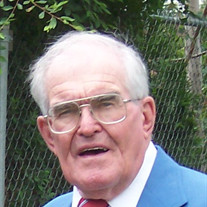 Donald Jacob Meyers returned to his heavenly home on December 28th, 2020 after a voracious battle with a long illness. His devotion to his family and his firm belief in God supported him in his struggle and ultimately gave him peace. Don now walks with the Lord. Don was born to the late Jacob and Ella Meyers, a baker, and a homemaker respectively, in Minot North Dakota on May 6, 1933. He was immersed in the Christian community that would be his lifelong support from an early age. He graduated from the WSU in 1951 with a degree in Mechanical Engineering and accepted a position at Hanford Nuclear site, that up to his dying day, sent letters to Hanford with solutions, and some criticism, to their clean up procedures. Don was a loving father who supported his two children wholeheartedly and was very proud of their family's accomplishments. He was a huge WSU Cougar fan and loved antique automobiles. He owned many over the years. He enjoyed sending math problems to his grandchildren Emily, Carly and Christopher. He was likely already scribbling math problems for his great-granddaughter Lyla. He was proud of his Dutch roots and enjoyed staying in touch with his Dutch relatives. Don was kind to many that were pretty much homebound and annually delivered many dozens of roses to those that could not get out around the Christmas holidays. He will be missed by many. Donald was blessed with a large and loving family. Don was an educator at heart. He is dearly missed by his loved ones, who celebrate the fact that he is at peace with his creator. We would hope that he is in a great game of Pinocle right now, "Bidding till the cows come home!" as he would say. Don is survived by his wife Martha; his sister, Marge Rhode, and his son Dan, and daughter Patti, both residing in Arizona, with Grandchildren Emily, Carly, and Christopher, and great-grandchild Lyla. Stepsons Steve's family, Lara, Kendra, Alex, Sebastian, and Ruby, Kelvin's family Austin and Amanda, along with many extended family and friends. Don will be laid to rest at Desert Lawn Memorial Park. The family gratefully declines flowers, but would appreciate donations, to First United Methodist Church of Kennewick, The Chaplaincy Health Care. Thank You Don, for all the years.

Donald Jacob Meyers returned to his heavenly home on December 28th, 2020 after a voracious battle with a long illness. His devotion to his family and his firm belief in God supported him in his struggle and ultimately gave him peace. Don now... View Obituary & Service Information

The family of Donald J Meyers created this Life Tributes page to make it easy to share your memories.

Donald Jacob Meyers returned to his heavenly home on December...