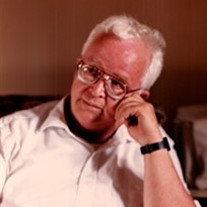 Donald R. Jones, a longtime resident of Richland, WA, died in his home on August 4, 2021. Don is survived by his wife; Clyda Jones; his children, Richard Ty Jones, Carmen Jones, Paula Jones, Nedra Hopkins, and Sari Thorpe; his brother Francis Jones and sister Peggy Brooks. Don was born in Ogden, UT on April 5, 1931 to Llewelyn Croxton Jones and Louisa Clara Clow. Shortly after his birth, his family moved to Southeastern Idaho, where he graduated from Shelley High School. Afterwards, he joined the Navy of the United States of America, where he served his country honorably. He continued his education at Idaho State University graduating with a Bachelor's in Science of Mathematics, minoring in History, at San Jose State University, CA. He worked as a System Analyst for Lockheed Martin serving in the aero industry, INEL, and Seimens. On December 23, 1959, he married Clyda Gardner in Firth, ID. Together, they had 5 children, 16 grandchildren, 16 great-grandchildren, and 1 great-great-grandchild, who were the most important part of his life. He lived a full and adventurous life serving his country which enabled him to see much of the world. When graduating from college, he graduated in the one percentile in mathematics in the United States. He had a good work ethic, believing that "if you do something, then you should do it right." He believed in learning to fix things on your own, not wasting resources, and conserving the planet. He strongly believed in the sacredness of life. He had a passionate and undeniable belief system. However, this was tempered by his kind and gentle soul. He enjoyed planting gardens and fruit trees. He loved to cook for his family and to share new flavors and foods. Most of all, he was a devoted husband, father, and grandfather. Everything he did, he did it for his family. He will be deeply missed by his family and friends.

The family of Donald Richard Jones created this Life Tributes page to make it easy to share your memories.