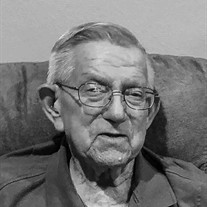 Donald L Johnston, 87, passed away Friday, June 26th. Don was born on October 24th 1932 in Springfield, MO., where he was raised by his parents Lester J and Osla P Johnston. Don graduated from Springfield High School in 1950. Don met Ann, also of Springfield, mid-December of 1952 and they were married by the 29th. Shortly into 1953 Don was drafted into the Korean War and was away until early 1955. Stationed at Taegu he served with the 822nd EAB, SCARWAF. One of his primary duties was taking care of an orphanage, work which he was very proud of. When he returned from Korea most of his family had relocated to Yakima where he was accepted into the Carpenters apprentice program with Local 770. Don worked on three local dam projects; Priest Rapids, Ice Harbor, and Lower Monumental. In the mid-1960's he began work for Nelson Construction who later merged with Lydig Construction. Don became a job superintendent and supervised projects all over the northwest including cold-storage facilities, shopping malls, schools, theaters, and prisons. Don and Ann even lived in Maui for a few years during construction of a condominium and a resort hotel. He was a charter member of Carpenters Local 59 in Spokane. Even after the long drives home when he worked out of town, with the weekends came travel to various locations for camping and fishing with his wife and two sons. Don was a founding board member of the Columbia Basin Bass Club. After retirement when Don and Ann weren't out on the Snake River fishing, they would be on the road for weeks at a time visiting relatives and sightseeing around the country. His beloved wife Ann left us in 2011 and that was hard on him especially since he'd lost his son Randy just a year earlier. Don was also preceded in death by his siblings Harold, James, and Virginia (Powell). Don is survived by son, Rick (Karen) Johnston; grandson, Matthew (Dawn); granddaughter, Jennifer; and Randy's widow Kathy. He is also survived by nephews and several loving nieces, and their families. Thank you to Dons' close friends and extended family who kept him company over the last several years. And a special thanks to Jenn with Hospice, who was the angel by his side over the last few weeks. Arrangements are being made by Mueller's Tri-Cities Funeral Home, 1401 S. Union Street, Kennewick. In lieu of flowers, please make any donations to the Chaplaincy Hospice or another charity of your choice.

The family of Donald Lee Johnston created this Life Tributes page to make it easy to share your memories.