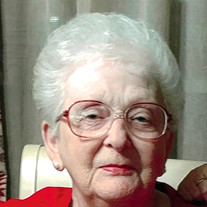 Dolores passed away Sunday, December 29, 2019 peacefully at her daughter's home surrounded by her loving family after a long hard battle with cancer at the age of 85. She fought that terrible disease and beat it for about a year and a half, but it came back and it finally took her. I know Mom would like to thank her team of Doctors, Dr. Sitti who wouldn't give up, he tried so hard and his amazing staff, a special thank you to Marisol who has such compassion in what she does. Dr. Lawenda she thought so highly of you, she absolutely loved you. Dr. Zo and the caring nurses at the Tri-Cities Cancer Center, she appreciated everything you did for her in her fight for life. In the end, Tri-Cities Chaplaincy Hospice was there for her, Dr. Kohan who is the doctor at hospice helped us have another 6 weeks with Mom, and we wouldn't have traded that special time for anything. And his staff, thank you so very much. Dolores was born in Tacoma, Washington to Ray and Dorothy Simi on September 23, 1934. She grew up in the Parkland/Eatonville area. She attended Eatonville High School where she was the Head Majorette, yes she was a baton twirler and very good at it. Her parents owned a few restaurants and, of course, she worked in the family businesses. First one was called The Blue Rustic in Parkland then there was The Monte Carlo in Fife and also The White Spot in Fife, loving that type of work and continuing that work all her life. It gave her such pleasure to take care of everyone she waited on. She worked in other restaurants over the years also. In 1975, she moved to the east side of the state to a little town named Benton City. Where she met Ed and they married only after knowing each other a few days. They went dancing on a Wednesday night and got married on the following Saturday. Everyone said it would never last. They celebrated their 45th anniversary this last May. They co-owned The Red Rose Restaurant in Prosser with her brother Bob and his wife Vicky in the late 1970's. Then she and Ed managed The Eagles Club in Prosser for a couple of years. Lots of fun times and funny stories! She worked the last 25 years for a place she loved and made many great friends. Finally retiring at the age of 82, she loved working and if she could she'd still be. She loved people; she never had a bad thing to say about anyone. She learned that from her mother, she was the exact same way. She loved dancing, going to the casinos and spending time with family. Dolores had 3 children; Lorelei, Debi and Bobby. When she married Ed, she gained 3 more children; Tammi, John and Kirk. Dolores is survived by her husband Ed, 5 of their children, Lorelei Eaton (Ralph), Debra Allaway (Dick) Bobby Wise, John Flieger and Kirk Flieger (Sheila). Dolores also is survived by 10 grandchildren; Jeremy, Willy, Preston, Glori, Kori, JT, Kyle, Katelyn and Kelsey. 21 great grandchildren and 1 great great grandchild. Dolores also leaves behind her loving brother, Bob Simi and loving sister, Darlene Roberts (Bill), she was very close to her siblings. Dolores has many nieces, nephews, cousins and some wonderful friends. Her greatest love in her life was her great granddaughter, Adison, who she spent so much time with! Those who knew Mom well, know Adison meant everything to her. Dolores was proceeded in death by her parents, Ray and Dorothy Simi; daughter, Tammi Trusley and her beautiful first-born granddaughter, Julie Eaton Johnson. We will miss you Mom, everyday of our lives! Services will be Saturday, January 18, 2020 at 1:00 PM at Mueller's Tri-Cities Funeral Home in Kennewick, Washington. A Celebration of Dolores' life will follow immediately after the service at Dick and Debi's house. Directions will be given at the service.

Dolores passed away Sunday, December 29, 2019 peacefully at her daughter's home surrounded by her loving family after a long hard battle with cancer at the age of 85. She fought that terrible disease and beat it for about a year and a half,... View Obituary & Service Information

The family of Dolores Rae Flieger created this Life Tributes page to make it easy to share your memories.