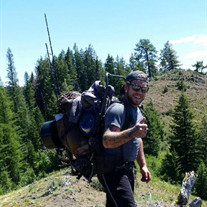 On Sunday, January 10, 2021 the Bergman family lost their beloved son, brother, and dad, Devin Brandon (33). Devin passed away while working on his car, something that he loved to do. He was always so excited to show us how fast it was and every new thing he did to it. Devin graduated in 2005 from River View High School. He was an exceptionally talented and creative flooring installer and loved making unique things with his hands. Devin leaves behind the love of his life, Chelsi Gregg, their daughter Madilyn (5), and his two sons, Keegan (13) and Talon (11). He is survived by his parents Polly and Ron Bergman and Michael Perrine. Devin leaves behind three sisters, one brother and 6 nieces and nephews; Joel Bergman and nephews Kolter and Kenny; Jessica Bergman and nieces Genesis and Galilee; Rebeccah Zuhlke (Dillon) and niece Kinzley; Hailey Depo and niece Alice. He is survived by his Great-Grandfather "Grampa" Paul Brandon, Great-Grandmother Ella Gilchrist, Grandmother Paula Bailey, Grandfather Jim (Linda) Atkins, Grandfather Wallace (Diana) Perrine, Grandfather Gordon Gilchrist, and so many more aunts, uncles, and cousins whom Devin loved very much. Devin held an extra special place in his heart for his "uncle" Brent Hansen and Hikao Hansen and cousins Courtney and Cheyanne. Devin is preceded in death by his grandmothers Marilyn Bergman and Rosalie Perrine; and his great grandmother, "Ginny" Doris Brandon. Devin loved his children immensely and was always teaching and playing with them. He especially loved babies and was forever holding and loving on them. Devin was a kid at heart and always had a smile on his face. He loved playing jokes on anyone he could, especially his littles. When Devin was around you always knew there would be some sort of excitement or adventure in store. There is a Devin shaped hole in all our hearts. Devin had a true love of nature and being in the wilderness. Devin was an avid hunter and fisherman from the time he was old enough to walk. He loved taking his little family on adventures in the mountains to fish, scout, pick morels, hunt, and camp. When it wasn't hunting season, you could find Devin in the mountains hunting for antler sheds. At one point his entire apartment was filled with deer and elk horns that he found. There was rarely a conversation with Devin that didn't involve hunting or fishing. Devin treasured the times that he was able to visit his Grandpa Wally in Montana and hunt for that "monster" buck and he was always planning the next big hunting trip with his family.

On Sunday, January 10, 2021 the Bergman family lost their beloved son, brother, and dad, Devin Brandon (33). Devin passed away while working on his car, something that he loved to do. He was always so excited to show us how fast it was and... View Obituary & Service Information

The family of Devin Michael Brandon-Perrine created this Life Tributes page to make it easy to share your memories.