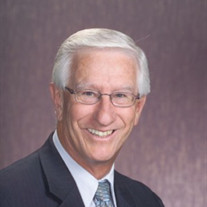 Dean Keith Strawn, age 77, of Kennewick, Washington passed away on March 5, 2021 at Fieldstone Memory Care in Kennewick, Washington. He was born in Ontario, Oregon on February 19, 1944 to Henry Keith and Ethel Pauline (Henderson) Strawn. Dean was raised on his family's farm in Fruitland, Idaho where he learned the importance of hard work and attention to detail. He was a proud member of the Fruitland High School baseball team and FFA. In the summer of 1961, Dean met his future wife Sandra (Sandi) Akers at the Payette, Idaho AandW Drive-In where she worked. In the spring of 1962, he graduated from Fruitland High School. Just days prior to Dean's graduation, he was involved in an auto accident that nearly took his life, but God had other things planned for him. On June 8, 1963, Dean married Sandi, and they moved to Kennewick to start their new life. Dean took a job at Dependable Janitor Service, working his way from floor waxer to eventually buying the company in 1970. He and Sandi operated it as a successful family business until 2009 when they retired. The Strawns taught their two children, Diona and Steve, the value of strong work ethics from a young age at both home and the family business. During the late 60's and early 70's, Dean raced his chartreuse 1957 Chevrolet in the Hobby Class as "The Mad Janitor" at the Tri-City Raceway and other nearby venues. He was so successful, a bounty was placed for anyone who could beat him. He chose to quit racing while he was at the top. Dean became heavily invested in service to his community through numerous business and civic organizations. Dean was a member of the Kiwanis Club of Kennewick for over 50 years. He was the founding president of the Kennewick Chamber of Commerce (now the Tri-City Regional Chamber of Commerce) where he advocated for small business to have representation in Olympia and strength within the community. Dean was President of the Tri-Cities Visitor and Convention Bureau in 1990 and a chairman of the board for the Private Industry Council. He served on the board of the Tri-City Industrial Development Council (TRIDEC) and helped organize the Tri-Cities Legislative Council, later serving three times as chairman. He also served on the board of the American Red Cross, the Boy Scouts of America, the Association of Washington Business and the Tri-Cities Good Roads Association. He was a charter member of the United Way Vintner Club. In 1998, Dean was the proud recipient of both the Tri-Citian of the Year and the Kennewick Man of the Year awards. One of Dean's crowning achievements was his role as President of the Kennewick Public Facilities District from 2001-2012 where he helped direct the planning, building and operation of The Three Rivers Convention Center, which opened in June 2004. Dean was a member of Columbia Community Church and was the treasurer for 17 years. Dean was a lifelong learner, avid golfer, cigar aficionado, wood worker, hunter, and he relished the challenge of completing his daily crossword puzzle. He looked forward to his weekly poker games with his friends. He and Sandi enjoyed many years of snowmobiling and riding ATVs with Ron and Cherie Willhite and others in British Columbia and Wallace, Idaho. In retirement, they pulled their 36-foot fifth wheel across the country, including Alaska. They enjoyed traveling and exploring the road less traveled. Dean cherished being surrounded by his family and passing down his stories and lessons he learned during his life. He was ecstatic about becoming a great grandfather. Dean is preceded in death by his parents as well as his sister Lorraine (Strawn) Kirkpatrick. Dean is survived by his wife of 57 years, Sandi; his daughter Diona (Kevin) Schilling; his son Steve (Heather) Strawn; grandsons, Clintin Hickman, Keagen Schilling and Wyatt Strawn; granddaughters, Bailey Schilling and Avery Strawn; great-grandson, Jace Schilling; his brothers Gary Strawn and Brian Strawn; and numerous nieces and nephews. Memorial contributions may be made in Dean's name to Chaplaincy Health Care/Hospice, 1480 Fowler St., Richland, WA 99352. Memorial services will be held on Saturday, May 15, 2021 at 2:00 p.m. at the Three Rivers Convention Center in Kennewick.

The family of Dean Strawn created this Life Tributes page to make it easy to share your memories.