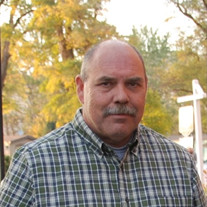 David Eugene Parker, a beloved and beautiful soul, passed away on December 22, 2021, at the age of 59. David spent the first part of his life in Utah where he began living with Harold and Norma Adams and family as a ten-year old foster child. He instantly became an integral part of the Adams household. David spent his youth traveling extensively with the Adams and doing many fun family activities such as hiking, fishing, and skiing. He graduated from Ogden High School in 1981, where he lettered in cross country and track. At age 28, David moved to Tri-Cities, Washington with his sister, brother-in-law, and his two "adopted-daughter" nieces, Micah and Cheyann. There, he co-owned and operated his own carpet cleaning business, CCL company. And it was in Washington where David met Maria, the love of his life. Maria had three children who David loved as his own. David and Maria married and welcomed a daughter which completed their family. David often said he felt incredibly lucky to have been blessed with an "instant" family. David is preceded in death by his father, Harold, and his brother-in-law, Curt. He leaves behind his mom, Norma; his wife, Maria; his siblings, Kenneth, Zina, Pamela, Michael, and Peter; his children, Carlos (Olga), Ricardo (Alicia), Susana, and Kelsey; and his ten grandchildren, Eduardo, Carlos Jr, Cecilia, Karla, Fabian, Ivette, Abigail, Isabella, Sebastian, and Camila. When David was a young boy, his father, Harold, would often tell him, "Today is the first day of the rest of your life." David would, in turn, say that to his children. Today, that same sentiment echoes on through David's memory and we cling to those words. David/Dad/Grandpa: We will always remember your zest for life, your unconditional acceptance of others, your courage, and your gratitude. You were the real deal. We love you. And we always will. A viewing will be held on Monday, January 3, 2022, from 4 p.m. to 8 p.m. at Mueller's Tri-Cities Funeral Home at 1401 South Union Street, Kennewick, Washington. Graveside services will occur on Thursday, January 6, 2022, at 11:00 a.m. at Desert Lawn Memorial Park. Celebration of Life will be held Thursday, January 6, 2022, at 4:00 p.m. at 1711 N 18 Dr, Pasco.

David Eugene Parker, a beloved and beautiful soul, passed away on December 22, 2021, at the age of 59. David spent the first part of his life in Utah where he began living with Harold and Norma Adams and family as a ten-year old foster child.... View Obituary & Service Information

The family of David Eugene Parker created this Life Tributes page to make it easy to share your memories.

David Eugene Parker, a beloved and beautiful soul, passed away...