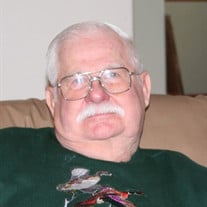 David L. Frimodt, Sr., 82, of Kennewick, WA passed away peacefully at home in the early morning hours on June 28, 2021. David was born October 25, 1938 in Lead, South Dakota to Einar Frimodt, Sr. and Phyllis Frimodt. David worked for L.W. Vail Co., a paving company in Pasco, Washington (and its successors) for nearly 40 years and served as Shop Superintendent, responsible for keeping the trucks and paving equipment running. David retired from Transtate Asphalt Co. in 2000. David was a jack of all trades (mechanic, welder, body work and paint) who had an amazing work ethic. He was also an avid outdoorsman. When he wasn't working, you could usually find him in a goose pit, duck blind, or holding a fishing pole. David was a proud member of the "Dirty Dozen" which was a group of older retired men who shared a common passion for goose hunting who enjoyed showing the younger generation of hunters how to get it done. David is survived by his wife, Judi Frimodt, his two sons David Frimodt, Jr. and Eric Frimodt, his stepchildren Tom Sanders, Sherri Wallin, Joe Cunningham, and their spouses, 14 grandchildren and 12 great-grandchildren, and his sisters JoAnne Huntsman and Barbara Grover. David was preceded in death by his stepdaughter Patti Sanders, and his brother Einar Frimodt, Jr. A funeral service is scheduled for 2:00 p.m. on July 17, 2021 at Mueller's Funeral Home at 1401 S. Union St., Kennewick, Washington.

The family of David Lee Frimodt created this Life Tributes page to make it easy to share your memories.