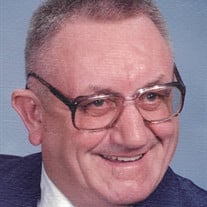 David LeRoy Bergum David was born February 15, 1940 to Peter and Letha Bergum of Belgrade Minnesota. He passed away peacefully on the morning of Tuesday, March 23, 2021. David grew up on a farm and while he never became a farmer, farming was always in his blood. He graduated in 1958 from Belgrade high school, and worked various jobs until he decided to move west. He arrived in Kennewick on December 31, 1959 and never looked back, that is until he went back to marry the love of his life, Judith Marquardt. They shared nearly 58 years of marriage together. David and Judy returned to Kennewick in September of 1963, and began their life together. Their first child Barbara, was born December of 1963, and son Brian was born January 1965. David's first job was working at Tony's glass shop but then in 1968 started in the career he truly loved, driving truck. He first did a 10-year stint with Acme Concrete and for a time operated his own dump trucks. But, in 1982, he found his calling and began hauling agricultural fertilizers to various farms throughout Eastern Washington, Eastern Oregon and Idaho for Western Farm Service, Harms Pacific Transport, and The McGregor Company; a career that spanned over 42 years. Throughout the years David and Judy enjoyed themselves vacationing at their timeshare in Rockaway Beach, Oregon; attending Tri-City Americans Hockey games, where they were season ticket holders for 31 years; attending car shows with David's second love, his 1956 Crown Victoria; and attending grandchildren's sporting events. In David's retirement years, he could be found tinkering in his shop, driving his John Deere tractor in his suspenders and cowboy hat, or policing the neighborhood on his sideby-side. He also enjoyed meeting up with "the guys" for coffee or taco Tuesday. He is preceded in death by his parents, Peter and Letha, and is survived by his wife Judy, Daughter Barbara Sordahl (Mark), son Brian (Vickie), five grandchildren; Davey and Christopher Ingersoll, Brett Bergum, and James and Steven Sordahl and seven great-grandchildren.

David LeRoy Bergum David was born February 15, 1940 to Peter and Letha Bergum of Belgrade Minnesota. He passed away peacefully on the morning of Tuesday, March 23, 2021. David grew up on a farm and while he never became a farmer, farming was... View Obituary & Service Information

The family of David L. Bergum created this Life Tributes page to make it easy to share your memories.