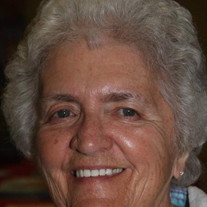 Darlene Williams Roberson was the oldest of four children born to Milton and May Williams on February 20, 1943 in Mason City, Washington. She went to be with her Lord and Savior on May 18, 2021. Darlene was raised in Kennewick, graduating from Kennewick High School in 1961. Shortly after graduating, she met her first husband, Lucky McCracken and together they welcomed 2 children, Tamra and Mike. She later met and married her second husband, Vern Haradon and they added 2 more children to the family, Tony and Marty. In 1980 she met Jim Roberson, with whom she would spend the rest of her life with. They were married in 1985 had just celebrated their 35th wedding anniversary in December 2020. Darlene worked in various clerical positions most of her early adult life and in the early 1980's she became a bus driver with Ben Franklin Transit for almost 10 years until she decided to return to college and pursue a nursing degree. She graduated from Columbia Basin College in 1992 as a Licensed Practitioner Nurse and began a career that she loved. After working as a clinical nurse for a few years, she found her passion and became a home health nurse taking care of developmentally disabled children. She often said that her favorite part of nursing was working at the Thompson House taking care of Gia, which she did for approximately 7 years. Darlene surrendered her life to God many years ago and attended church regularly no matter where she lived. She was an active member of Finley Community Church for the last 10 years. She was also an active member and past board member of Sons of Norway as well as the Kiwanis of the Horse Heaven Hills. Darlene was preceded in death by her parents, May and Milt Williams and a very precious child who was dear to her heart, Gia Cox. She is survived by her husband Jim Roberson, her children Tamra (Scoti) Burbank, Mike McCracken, Tony (Dawn) Haradon, Martin Haradon, step-children Wes (Lynda) Roberson, Laurel Englehart, Loren (Mary) Veldran, Lori (Greg) McCoy, 17 grandchildren, 17 great-grandchildren, sister Elaine (Terry) Banderas, brothers Ike (Shirley Farr) Williams and Gus (Laurie) Williams, numerous nieces and nephews and special lifetime friends, Donna Rasmussen and Sue Thompson.

Darlene Williams Roberson was the oldest of four children born to Milton and May Williams on February 20, 1943 in Mason City, Washington. She went to be with her Lord and Savior on May 18, 2021. Darlene was raised in Kennewick, graduating from... View Obituary & Service Information

The family of Darlene Roberson created this Life Tributes page to make it easy to share your memories.

Darlene Williams Roberson was the oldest of four children born...