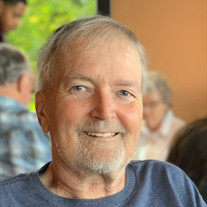 Dale Allen Bennett, 67, of Kennewick, Washington, peacefully passed away on Sunday, April 17th, 2022, surrounded by his loved ones. Dale was born on August 16th, 1954, to Carl and Shirley Bennett in Kennewick, WA. He spent his childhood in Richland, Washington where he graduated as a proud Bomber from Richland Highschool in 1972. After high school, Dale served in the US Military as an Army Medic and received an honorable discharge in 1978. He then went on to spend his entire professional career as a local business owner in the fire equipment industry. Dale was a very proud man with a huge heart that people were drawn to. He was known for his endless smile and his kind and generous spirit. He took great pride in his family and friends and loved them deeply. Dale's natural ability to make people laugh and his unending generosity claimed him countless friendships, he believed in the good of everyone. In his younger years, he enjoyed playing beer league softball with his close buddies and even the occasional bowling league. He was an avid supporter of the Seattle Mariners and Seahawks and was never known to turn down sweets or the offering of a mocha delivery. Dale married Patricia Connie Bennett (Levno) in the fall of 1977. They were the proud parents of five children, Tricia, Anne Marie, Deanne, Patrick and Laura. Dale was preceded in death by his father Carl Bennett, brother Martin Bennett, wife Patti Bennett, and daughter Anne Marie Bennett. He is survived by his mother Shirley Bennett, brother Dana Bennett, and sister Carla Ellingsen. His children Tricia Bennett, Deanne Bennett, Patrick Bennett and Laura Wilfong. Dale was a proud "Papa" to six grandchildren that always brightened his days, Khloe, Mason, Tegan, Holden, Lennon and Banks, as well as many in-laws, and nieces and nephews whom he adored. Dale will be honored and properly interred with Military Honors on April 30th, 2022, in Kennewick, Washington. A celebration of life will follow at the West Richland Golf Course at 3:00pm. He will truly be missed; however, his memory and spirit will continue to grace those that he impacted throughout his life.

Dale Allen Bennett, 67, of Kennewick, Washington, peacefully passed away on Sunday, April 17th, 2022, surrounded by his loved ones. Dale was born on August 16th, 1954, to Carl and Shirley Bennett in Kennewick, WA. He spent his childhood in Richland,... View Obituary & Service Information

The family of Dale Allen Bennett created this Life Tributes page to make it easy to share your memories.