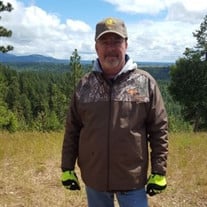 On Tuesday, March 9th, 2021 Curtis (Curt) Jay Shaw, loving husband, father and grandpa (papa) passed away peacefully after a two-year battle of melanoma cancer at the age of 57. Curt, the youngest of four boys, was born August 31, 1963 in Kennewick, WA to Bud and Dorothy Shaw. Curt attended and graduated from Kamiakin High school in 1981 and on May 24th, 1986 he married his wife of 34 years Rhonda Bartlett. It was the beginning of a beautiful family raising son Devin and daughters Jessica and Kelsey. Curt was passionate about the automotive industry so to no surprise he worked for Russ Dean Ford, Leskovar, and later the City of Richland. In his later years he worked for the City of Walla Walla and City of Pasco as Fleet/Operations Manager. During his career, Curt would go on to invent 2 key tools. For Russ Dean Ford he invented a diagnostic tool for testing cruise control and for the City of Richland he invented what is known as the "tip over switch" which was for the safety of maintenance workers. Curt was well known for his quick wit, infectious smile and his kind compassionate spirit. He loved spending time with his family. You could catch him camping, riding four wheelers or making s'mores around the campfire. There were also many memorable family trips to Disneyland, the Oregon Coast and Las Vegas. Curt had a passion for music, from being a member of his high school choir and the CBC's Desert tones. His day would always end with him playing the piano and/or singing, which was adored by family and friends. Curt would always keep himself busy tackling projects around the house, to rebuilding Mustang engines with his son, and even building random things like an electric bicycle. Curt was always willing to lend his knowledge and expertise of automotives to family and friends even if it meant sacrificing his Saturday or Sunday afternoons. You needed a tool? He'd have it! You had a question? He had an answer! Curt was preceded in death by his father Bud. He is survived by his wife Rhonda, his three children Devin (Ashley), Jessica (William), and Kelsey, three granddaughters, his mother Dorothy, and his three brothers, Mike, Lloyd, and Frank.

On Tuesday, March 9th, 2021 Curtis (Curt) Jay Shaw, loving husband, father and grandpa (papa) passed away peacefully after a two-year battle of melanoma cancer at the age of 57. Curt, the youngest of four boys, was born August 31, 1963 in Kennewick,... View Obituary & Service Information

The family of Curtis Jay Shaw created this Life Tributes page to make it easy to share your memories.