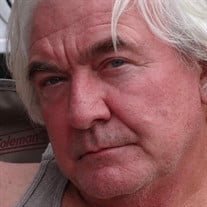 Curt Morgan passed away unexpectedly on December 17th in Richland, WA at the age of 64. Curt was born on January 20th, 1956 in Great Falls, Montana to Orville and Ivy Morgan. He graduated from Pasco High School in 1974. Curt was very passionate about cars and motorcycles. He raced dirt bikes for Tri-Cities Honda in the 70s and his mother was often upset with him for stealing home items for his hobbies, such as the chrome vacuum tubes to make his exhaust for his race bikes. Curt's passion for racing motorcycles in his youth lead him to a 2nd place finish in the Canadian Nationals Motocross. He also did TV commercials for Kawasaki Motorcycles and Jet Skis. Curt once cut a cast off his broken leg so he could race. He could fix anything and if he did not get it right the first time, he would not give up until it was fixed properly; no jimmy-rigging! Curt and Beth were married for 37 years, each having two children from previous marriages, together they brought a son into the flock. Later after all the kids had flown from the nest and started their own families, Curt and Beth bought a motorhome and a boat. One of their favorite places to visit was the Oregon Coast! They were planning their next trip which would have been exploring Montana. One of their other passions was fishing which worked out great because they lived not far from the Snake River. They were fortunate enough to travel to Hawaii three times with Patrick and Judy Kazan. The Big Island was Curt's favorite. Curt and Beth had a wonderful life with many great and hilarious memories! They were true soulmates that were destined to be together in this life. Curt is survived by his wife, Beth Morgan, children; Denton (Carra) Morgan, Monica Trattles, Chase (Erica) Morgan, he was blessed with two stepchildren, Trista (Chris) Lizotte, Creighton (Crystal) Hermes, his brothers Dana (Rachel) Morgan, Monty (Susan) Morgan, eight grandchildren and one great grandson as well as many nephews and nieces. Also, Bailey Nicholson Finney was like their adopted child since Chase and Bailey grew up together, considering each other siblings. He is preceded in death by his mother and father, Ivy and Orville Morgan, his brothers, Clifford Morgan and Ron (Karen) Morgan and mother-in-law Mary Wilson. Curt was the biggest little brother to all his brothers. Curt lived his life boldly and fearless. Curt is in Heaven surely keeping his wife, kids and grandchildren under his watchful eye to keep them safe and guiding them with love. Curt, we love you and we will miss you immensely; we now have a vacant spot in our hearts. We will see you in Heaven when God calls us. Make sure you send our love to all our loved ones in heaven. The celebration of life will be held on January 2nd. For further details, please contact the family.

Curt Morgan passed away unexpectedly on December 17th in Richland, WA at the age of 64. Curt was born on January 20th, 1956 in Great Falls, Montana to Orville and Ivy Morgan. He graduated from Pasco High School in 1974. Curt was very passionate... View Obituary & Service Information

The family of Curtis Brent Morgan created this Life Tributes page to make it easy to share your memories.

Curt Morgan passed away unexpectedly on December 17th in Richland,...