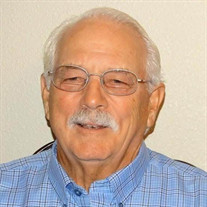 Curtis Eugene Harper died Saturday, June 27th, 2020, at Chaplaincy Hospice House in Kennewick WA, following a battle with COPD. He was preceded in death by his parents Jack and Jewel Harper, and his brother Charles. He leaves his wife Charlotte of 53 years, son Eric Harper (Jackie); daughter Tanya Franz (Josh); daughter Michelle Cavanaugh (John); grandchildren Tyler, Cody, Kyleigh, Jonathan (Shayla), Ashley (Kory), Stephen; greatgrandchildren Beckett and Ridge; sisters Delores (David) and Pamela; seven nieces, two nephews, and a multitude of great friends. Curtis was born on June 3, 1941 in Pensacola Florida. Being a Navy family, the Harpers traveled the US from coast to coast. When Curtis was 15, his family and he moved to Eltopia Washington. He graduated from Pasco High School in 1960. In 1961, Curtis enlisted in the Navy and served for four years. He returned to Eltopia in 1965 and attended Columbia Basin College, where he graduated from the welding program. In May 1965, Curtis met the love of his life, Charlotte Ann Wells. They were married on November 11, 1967. Curtis started his welding/machinist career in Portland, Oregon, and retired in 2003 in Burbank, Washington. Curtis loved the outdoors and many activities especially kayaking with Tom Putnam, and bike riding with Rick Hall. Those of you who knew Curtis would attest to the fact that he was a memorable person. He had the gift of honesty and openness; you always knew where Curtis stood. He had an amazing ability to love every person he met, it didn't matter who you were. He never met a stranger. His bear hugs were legendary. One hug from Curtis and your troubles would melt away. Curtis was able to say the really important things like, I love you, and I appreciate you. He could figure out anything mechanical, and he was never, ever a quitter, even at the end. His faith in Jesus never faltered. He knew where he was headed and talked frequently of his home in Heaven. Curtis was often heard to say the words, "I am so blessed!" He knew that everything he had was a gift from God. His belief in God was number one in his life, followed by his love for his family and his friends. Curtis, there will never be another like you. We will miss you every single day until we see you again. Due to the COVID crisis, no memorial service will be held at this time. Memorial contributions can be made in Curtis's name to Rosetta Memory Care Facility 5921 Road 60, Pasco, WA 99301, and Pasco Christian Church 1524 W. Marie St. Pasco, WA 99301.

Curtis Eugene Harper died Saturday, June 27th, 2020, at Chaplaincy Hospice House in Kennewick WA, following a battle with COPD. He was preceded in death by his parents Jack and Jewel Harper, and his brother Charles. He leaves his wife Charlotte... View Obituary & Service Information

The family of Curtis Harper created this Life Tributes page to make it easy to share your memories.