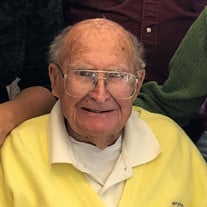 Coy Love was born on January 19, 1922 in San Diego, California to John and Mae (Dunnigan) Love. He died at the age of 98 at Cheney Assisted Living on September 16, 2020. Coy grew up in Bremerton with brother Jim and sister Pat (both now deceased). Jim and Coy played ball with other town kids in Warren Avenue Field forming a strong kinship with his brother. He attended Bremerton High School and graduated in 1940. He then went to Washington State College in Pullman on a boxing scholarship and majored in mechanical engineering along with going through the ROTC program. Coy lived at Stimson Hall on campus where he met his first wife, Mary Ethel Todd, who played the piano at Sunday dinners for the men. They married in 1943 and then Coy continued into the Army during World War II. After the war, Coy and Mary Ethel moved to the Tri-Cities, where they raised three children. Coy could often be found on the golf course and perfected his game, making no less than six holes in one over the years. When his sons went into Cub Scouts, he became a Pack Leader along with helping them and other boys with the Scouting program. Work was at Hanford and Satsop for most of his career and he earned a certification in nuclear engineering which led to management jobs in both areas. Many of his WSC friends worked and lived in the Tri-Cities and they enjoyed good times together with their families boating and picnicking. Brother Jim and his family also spent many summer vacations with Coy's family, and a fun time was had by all. Jim and Coy were close and provided support for each other. After his first wife died in 1970, he then married Maurine (Phipps) and adopted her daughter, Cheryl. They had many journeys together and all the kids and grandkids would meet at Seaside, Oregon for a week in the summer. Coy could light up a room with his smile and personality and could always make you laugh. Even though Coy worked and played hard, he always felt that his most important job was being a father - and a great one he was! He is survived by his children including Donna (Jim) Reinbold, Davenport, WA; John (Bev) Love, Benton City, WA; Jim (Lisa) Love, Castro Valley, CA and Cheryl Love, Yelm, WA plus seven grandchildren and three great-granddaughters. There will be a private family graveside service on October 9, 2020. Memorial contributions may be made to the WSU Foundation or a charity of your choice. The family would like to thank the wonderful staff at Cheney Care/Assisted Center along with his physician, Dr. Julsen, for the superb care he received.

Coy Love was born on January 19, 1922 in San Diego, California to John and Mae (Dunnigan) Love. He died at the age of 98 at Cheney Assisted Living on September 16, 2020. Coy grew up in Bremerton with brother Jim and sister Pat (both now deceased).... View Obituary & Service Information

The family of Coy E Love created this Life Tributes page to make it easy to share your memories.