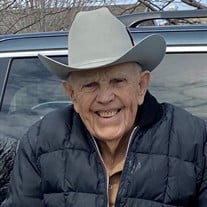 Clyde Warren Conklin "Pop" passed away peacefully at his home surrounded by family on May 14, 2021. Clyde was born October 29, 1924 in Baker, Oregon, he was 96 years old. He was the oldest of five children born to Arthur E. and Helen Conklin. Clyde graduated from Baker High school in 1942 and enlisted in the United States Army on February 29, 1944. He served in the 17th Cavalry Reconnaissance Squadron in England, France, Belgium, Holland, and Germany as a Light Tank Crewman. He was honorably discharged as PFC May 14, 1946. After his military service, Clyde returned to Baker where he met the love of his life Dorothy Mae Devlin. They were married April 6, 1948. Clyde and Dorothy had five children: Cathy, Clyde E., Craig, John, and Carol. They were married 69 years before Dorothy's death May 2, 2017. Clyde was hired by First National Bank which took the family to Pendleton, Oregon. They lived in Pendleton for about four years before moving back to Baker, Oregon, where they purchased a ranch in the Missouri Flats area. He worked various jobs and ranched on the side running a cow-calf operation with his wife and kids. They sold the ranch in 1972 and moved to Medford, Oregon, where he went to work for the Oregon Department of Veterans Affairs. He accepted a new position with the Department in Roseburg, Oregon and retired from the Department of Veterans Affairs in 1990. Shortly after retirement Clyde and Dorothy sold their Roseburg home and began full-time RVing. They would travel south for the winter and made trips around the United States and made many lifelong friends. Clyde would say it was some of the best times of their lives and encouraged his children to do the same. Over the years Clyde became a grandfather to 16 grandchildren: Jerrod Culley, Jill Culley, Jake Culley, Chad Conklin, Cliff Conklin, Cory Conklin, Kevin Conklin, Kyle Conklin, Cary Conklin, Sean Conklin, Cortney Conklin, Shannon Conklin, Haley Conklin, Kayla Nelson, Kaitlyn Breazeale, Kaycee Breazeale and 24 great-grandchildren, the latest great-grandson being born 10 days prior to his passing. Clyde is survived by his children and their spouses, Cathy and Dan Culley, Clyde and Karen Conklin, Craig and Sue Conklin, John and Linda Conklin, Carol and Brian Breazeale, his 16 grandchildren, 24 great-grandchildren, his sisters Barbara Sackos and Mildred Hester and numerous nieces and nephews. His funeral service will be at Parish of The Holy Spirit 7409 W. Clearwater Avenue Kennewick, WA on Thursday May 27, 2021 at 10:30 AM. Interment will be at Desert Lawn Memorial Park, Kennewick, WA with military honors. Memorial contributions can be made in Clyde's memory to the charity of your choice.

Clyde Warren Conklin "Pop" passed away peacefully at his home surrounded by family on May 14, 2021. Clyde was born October 29, 1924 in Baker, Oregon, he was 96 years old. He was the oldest of five children born to Arthur E. and Helen Conklin.... View Obituary & Service Information

The family of Clyde Warren Conklin created this Life Tributes page to make it easy to share your memories.

Clyde Warren Conklin &quot;Pop&quot; passed away peacefully at his home...