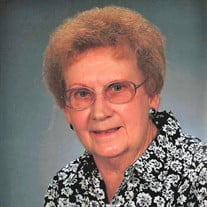 Clara Marie Robertson, 92, passed away in her sleep of natural causes on January 30, 2022. Clara was the second oldest of seven children born to Louise and Claris Davenport, on June 5, 1929, in Bismarck, North Dakota. Clara's siblings (Helen, Alfred, Rosemary, Joe, Robert and Donna) were all dear to her heart. She left this world cherishing her family and memories of a fulfilled life. Clara and her family moved a lot during her early childhood as her father worked construction and needed to go where the jobs were available. In 1947, she graduated from Sacred Heart Academy, a Catholic High School, in Klamath Falls, Oregon. The family finally settled in Hanford, Washington. While at Hanford, she met a cute sailor, Floyd (Robbie) Robertson. They hit it off and married on December 31, 1949, and settled in Richland. They were the first couple to be married at St. Joseph's Catholic Church in Kennewick. In 1950, their daughter, Kathi, was born. A few years later, in 1954, they were overjoyed to welcome a son, Doug, and their family was complete. As the children got a little older, Clara went to work at J.C. Penney in downtown Kennewick. When the Columbia Center Mall opened in 1969, Clara went to work for the Bon Marche in their cash office where she worked for many years. In 1975, Robbie bought his own milk routes and they formed Robertson's Dairy. In 1977, Clara and Robbie bought Robbie's Place Tavern where they met many wonderful, close friends. In 1984, they sold the tavern and semi-retired. Over the years Clara and Robbie were both hard workers and built many homes, lived in them and resold them. They truly enjoyed being able to build and resell such beautiful homes. After Robbie's death in 2007, Clara became even more active in Catholic church activities. She was an active member of the Catholic Daughters of the Americas and loved being able to volunteer on their projects. She was pretty well known for the excellent brownies she always made for their bake sales. Her Catholic faith was something that sustained her throughout her life. Clara is survived by her children, Kathi (Tim) Hanifen and Doug (Georgie) Robertson; three grandchildren, Jason Hanifen, Ryan Hanifen and Melissa Buttice; great-grandson, Chase Hanifen; sisters, Rosemary Johnson and Donna Tyacke and one brother, Robert Davenport. Preceding her in death are her parents, two brothers, a sister and a grandson. Graveside service will be held at Desert Lawn Memorial Park at 1:00 P.M. on Tuesday, February 8, 2022. Due to COVID, a celebration of life will be postponed until June 5th in an outside ceremony. Location to be announced at a later date. Special thanks to Tri-Cities Chaplaincy Hospice and Tranquility Manor. In lieu of flowers, the family asks that donations be made to Tri-Cities Gospel Mission.

Clara Marie Robertson, 92, passed away in her sleep of natural causes on January 30, 2022. Clara was the second oldest of seven children born to Louise and Claris Davenport, on June 5, 1929, in Bismarck, North Dakota. Clara's siblings (Helen,... View Obituary & Service Information

The family of Clara Robertson created this Life Tributes page to make it easy to share your memories.

Clara Marie Robertson, 92, passed away in her sleep of natural...