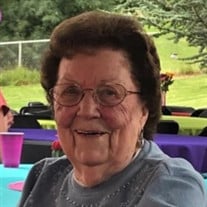 The earthly journey of Clara Marie Reed ended on October 4, 2021 at her home in Kennewick, WA, fulfilling her long held wish that her end would occur in her own house. Clara was born on October 12, 1924, to Henry and Inez Miller at their house, 1 mile east of Wilbur, WA.. Growing up on a farm taught her the usual care of livestock such as milking cows besides the indoor domestic chores of cooking, canning, and sewing. In her teen years she was the hired girl for several area farmers doing the cooking and household chores during the harvest. She and her older brother Harold still found time to do things that usually ended with both of them in trouble such as trying to ride the calves. They raised two large goats that they could ride. However, they knew that the goats would not tolerate any other riders and Clara and Harold always had a great laugh when their friends would try but be thrown off. During her junior year in high school, she was chosen May Queen of Wilbur. She graduated from Wilbur High School in 1942 after which she went to work at the Spokane Air Depot until 1943 when she left to marry William C. Reed who was in the Army stationed in California. On August 28, 1950, the young family including a very pregnant Clara (her third child was born September 10) moved into the home on First Avenue where she resided until her death. After William (Bill) died in January 1972, Clara was offered the position of Assistant Manager at the Tri-City Construction Council which she held from 1973 to 1995 where she worked with one of her best friends, Elvera Nelson, who was manager. Besides working, she began taking trips with friends: to Sweden and Scandinavia, Mexico, Alaska, Branson, Missouri, the Panama Canal and the yearly trip to see her older sister in 29 Palms, California. While in California the sisters discovered Laughlin, Nevada, and those “evil” slot machines. These slot machines sent messages to their cousins at other casinos which have been luring her to deposit her money ever since. Her last trip was to Wild Horse Casino in Pendleton, OR. the August before her passing. She was active with the Women’s Society and president of Joy Circle for many years at the First Methodist Church in Kennewick, WA. She was also a member of the Eagles Club where she enjoyed the dancing and fellowship. Clara was preceded in death by her parents, husband, brother, and older sister. She is survived by her children: Gregory Reed (Lou Ann), Marie Jurgensen (Grant), Randy Reed (Barbara), and Connie Pentzer (Dick) plus 9 grandchildren, 17 great grandchildren, her youngest sister Dorothy Ferguson and many nieces, nephews, and cousins. Burial at Riverside Height Cemetery, Kennewick, WA., will be held on October 12, 2021, with a Memorial following at the First Methodist Church, Kennewick, WA. Since this a completion of her Circle of Life with October 12 being her 97th birthday, a birthday celebration will be held in the church Fellowship Hall with birthday cake following the Memorial. Her family hopes that everyone will remember Clara fondly and how she was when they knew her. In lieu of flowers, the family suggests a donation to the Wilbur Cemetery, 34913 Sherman Rd. N., Wilbur, WA 99185, or to the charity or organization of your choice. Final arrangements were made by Muellers Funeral Home (web site: www.Muellersfuneralhome.com)

The earthly journey of Clara Marie Reed ended on October 4, 2021 at her home in Kennewick, WA, fulfilling her long held wish that her end would occur in her own house. Clara was born on October 12, 1924, to Henry and Inez Miller at their house,... View Obituary & Service Information

The family of Clara Marie Reed created this Life Tributes page to make it easy to share your memories.

The earthly journey of Clara Marie Reed ended on October 4, 2021...