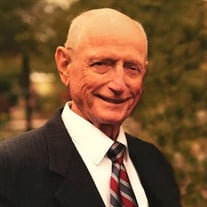 (September 21, 1930 - September 14, 2020) Charles Evans, 89, of Richland, Washington passed away peacefully in his sleep on Monday, September 14, 2020. A native Mississippian, Chuck, as he was known to most, was born on Sunday, September 21, 1930 in Richland, Mississippi. While he was still very young, he moved with his mother and step-father, Nace Watkins, to Washington state to work on the Hanford project. He attended Richland-Columbia High School from which he graduated. While he was young, he struggled with a bout of Scarlett Fever. In High School he participated in photography, tennis and basketball. He joined the Air Force, went off to serve his country in the Korean War and was later honorably discharged. On September 13, 1954, he married his eternal companion, Valene Williams, in the Logan Utah Temple of The Church of Jesus Christ of Latter-day Saints for time and all eternity. The day before his death they celebrated 66 years of marital bliss. Chuck was never idle. He was always working on something worthwhile. He instilled this work ethic into his children. · He was elected to the Washington State House of Representatives and served from 1968-1971 · He served as President of the Kiwanis and Rotary Clubs · He was a 20 (twenty) year veteran Basketball Official, National Federation of State High Schools. · He spent 30 (thirty) years of activity with the Boy Scouts of America and received the Silver Beaver Award. By profession he was a teacher, principal and superintendent of schools in both states of Washington and Alaska. Over the years he taught science, language arts, social studies and math. He was also known to referee a lot of basketball games throughout the years. During his teaching career and beyond he also led his family in another HUGE (ad)venture-that of commercial salmon fishing on Kodiak Island, Alaska. That venture began in 1976 and continues today. He retired from teaching and returned to his native Mississippi in 1993. But don't think for a moment he took a seat in his rocking chair. He became: · The Assistant State Coordinator and Instructor for the AARP Driver Safety Program in Mississippi as well as · The Senior Vice Commander, Rankin/Florence VFW Post 5048 He was a faithful member of The Church of Jesus Christ of Latter-day Saints. He and his faithful companion, Valene, served three full-time missions: one in Australia, Melbourne, one in Canada, Winnipeg and a third was a service mission in Public Affairs and Emergency Preparedness in the Louisiana Baton Rouge Mission. Chuck is survived by his wife Valene of Richland, WA; sister Lana (Lance) Sorensen of Selah, WA; and children: Kent (Molly) Evans of Noorvik, AK, Dennis (Keena) Evans of Cedar City, UT, and Cherie (Darren) Simpson of Blackfoot, ID; 15 grandchildren and 5 great-grandchildren-with #6 on the way. He was preceded in death by his father, Percy Evans and mother, Belle Hutson Evans and daughter, Shirley Evans Andre. Due to the Corona Virus, the family is holding private services.

The family of Charles Elvin Evans created this Life Tributes page to make it easy to share your memories.