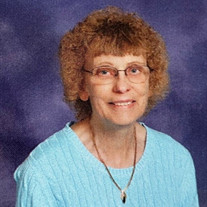 Carol Christine "Chris" Bragg passed away on August 15, 2021 with her loving family at her side, she was 77. Chris was born in Pasco, Washington on October 24, 1943 to parents, Willard and Bernice Stone. She attended Pasco High School and graduated in 1962. She worked for Lourdes Hospital for over 25 years and enjoyed meeting up with her co-workers for lunch even after her retirement. Chris was a member of the Pasco First United Methodist Church and volunteered there, frequently, until it's closure, when she then became a member of the Kennewick First United Methodist Church. She was also a member of the Golden Rule Rebecca Lodge #242 and led several troops of Girl Scouts. On May 16, 1965 she and her husband, Charles Bragg, were joined in marriage. From this bond they had two children: Joy and Jeffrey. What Chris enjoyed the most was spending time with family and friends. She also loved gardening, bird watching, cooking, and was an avid fan of murder mysteries in both book and TV form. She was preceded in death by her parents; husband, Charles Bragg; brother, Keith A. Stone; sister, Barbara Rorie; brother-in-law, Richard "Rick" Bragg; sisters-in-law, Shirley Hower, Beverly Elliott, Judy and her husband Kenneth "Ken" Smith , Norma and her husband John "Bill" Silver, Estilene and her husband Walter 'Burl' Combs; uncles, Richard Stone, Leighton M. Stone and his wife Mary; aunts, Vera and her husband Homer Lathrop, Tessie and her husband Edgar Haag; and several cousins, nieces and nephews. She is survived by her two children, Joy Bragg-Staudt and husband Doug, and Jeffrey Bragg; her sisters-in-law, Eloise "Eadie" Stone, Ellen Quigley, and Beryl Ritter, aunt Vi Stone; several cousins and many nieces and nephews. A memorial service will be held at 11 a.m. Saturday, September 11, 2021 at the First United Methodist Church, 2 S. Dayton Street Kennewick, Washington. Graveside services will be held at 1 p.m. Saturday, September 11, 2021 at Desert Lawn Memorial Park, 1401 S. Union Street, Kennewick, Washington. In lieu of flowers, please consider a memorial contribution to the National Audubon Society or the Tri-Cities Chaplaincy Hospice House.

Carol Christine "Chris" Bragg passed away on August 15, 2021 with her loving family at her side, she was 77. Chris was born in Pasco, Washington on October 24, 1943 to parents, Willard and Bernice Stone. She attended Pasco High School and graduated... View Obituary & Service Information

The family of Carol Christine Bragg created this Life Tributes page to make it easy to share your memories.