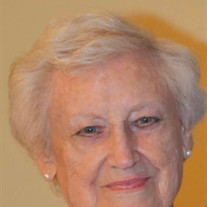 6/9/1927 - 7/18/2020 With saddened hearts we announce the passing of our beloved mother, our matriarch, the center of our universe, our light. Ending her long suffering with Alzheimer's, just five weeks after her 93rd birthday. She was at Hospice House in Kennewick surrounded by family in her final days. Candy, as known to her friends, was born in Sturkie, Arkansas to Nelli Mae (Heinrich) and Holland Andrew Ball. She was the second born of three daughters. Candy, Susie Belts and Juanita Lockard (deceased). Candy and Sue were raised by their father and grandparents. She also had 4 half siblings; Norma Hale, Owen Heinrich, Opal Alsup and Philip Heinrich. She was very close to 2 step sisters, Thelma Rhine and Gladys Lunn (both deceased). Her nickname was "Tomboy" as a child, because she followed daddy around with his toolbox, learning to fix and build things. Candy married Edward Bridges at age 16. He fought for the Army in World War II. When he returned, they bought a farm in Arkansas where daughters Melva (Bridges) Sternfels and Connie (Bridges) Kneblik (deceased) were born. Later moving to Michigan where daughter Debbie (Bridges) Buckles was born. In 1960 she married Army SFC Clare " Bob" Rail. They lived in Mannheim Germany for several years. Son, Leon Rail and daughter, Lynn (Rail) Wadsworth were born there. She ultimately settled near her sister Sue, in Richland Washington. Married Billy Thomas who was a country western singer. She designed and sewed all his stage clothing. Candy was an accomplished seamstress and quilter, several of her quilts were displayed at the Benton Franklin County fair. Every newborn grandchild received one of her beautiful quilts. Crocheting and gardening were two of her other passions. She loved animals. Prince and fluffy, her last two Shih Tzu dogs, were constant companions for her. They are forever near and dear to her heart. She worked 26 years for Lamb Weston in Pasco. Serving proudly as the union job Stewart, representing all employees. Candy has five children; Melva Sternfels Connie Kneblik (deceased) Debby Buckles Lynn Wadsworth Leon Rail 11 grandchildren; Del Hutson (deceased) Monty Hutson Angela Weatherly Richard Weatherly Delanya Savage Nicole Buckles Kelsey Buckles Amber Godwin Wendy Garcia Kylie Grace Cody Rail And 47 great and great- great grandchildren!

6/9/1927 - 7/18/2020 With saddened hearts we announce the passing of our beloved mother, our matriarch, the center of our universe, our light. Ending her long suffering with Alzheimer's, just five weeks after her 93rd birthday. She was... View Obituary & Service Information

The family of Carmel Thomas created this Life Tributes page to make it easy to share your memories.