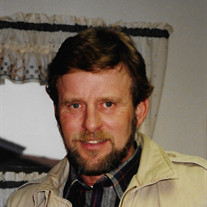 Carl Arthur "Cal" Landby passed away peacefully November 18, 2019 after a long, courageous battle with cancer. Cal was born on December 10, 1942 in Barstow, Ca. His family soon moved to Warroad, Minnesota to work the family farm. Cal spent his youth working on the family farm, carving remarkable wooden toys and playing his favorite sport of hockey. When Cal was just a teenager, he decided farming wasn't his calling and traveled West to the Tri-Cities where he lived the rest of his life. In 1959, he enlisted in the US Army National Guard at Fort Ord, CA and proudly served for two years before being honorably discharged in 1961. Shortly thereafter, Cal met the love of his life, Barbara. They were married in 1964 and quickly started their family with first son Rod, then Paul a few years later. Cal's early talents steered him to pursue his life profession of carpentry and welding. He joined Local Union 1849 as a carpenter's apprentice. His remarkable skills won him the Washington State Carpentry Apprenticeship contest in Spokane, WA in 1970 and went on to place in the "Top 5 in the nation" in Denver, CO. Cal's esteemed career included working for DOE, Supervisor positions on many large construction projects and ultimately owning his own construction company. He was an intricate part in many commercial buildings and homes in the Tri-Cities and surrounding areas. He also instructed night courses in welding at Columbia Basin College. He retired from the Carpenters Union in 1997. Along with his extensive interest and knowledge of all aspects of construction, another life passion of his was cars -- buying, fixing, rebuilding, body work, …. he did it all! He was known in his younger years with the local mechanics and part stores as "Mr. Corvair" since he owned many of these Chevrolets. At one single time he had as many as a dozen and they were among his favorites. He was a rare person who got excited when a car would have trouble -- the bigger the problem, the better the challenge. He spent countless hours reading OEM Auto Manuals and later in life watching YouTube auto repair videos. Cal leaves behind his loving wife of 55 years, Barbara; son Rod (Jeanene, grandkids Calvin, Olivia and Gianni) Landby and son Paul (Dana, grandkids Cody and Jozey) Landby. Sisters, Jayne Simon and Leone Schofield and Brother Glen Landby, along with many nieces and nephews. He is preceded in death by his parents Leonard and Fayth Landby, step father Earl Engstrom and his mentor and loving Grandmother Freda Reymore. The family would like to invite all friends to join them in this "Celebration of Life" reception to honor Cal at St. Patrick's Catholic Church in Pasco, WA, on Tuesday, November 26th @ 1:00PM. In lieu of flowers, please consider donations to St. Vincent De Paul.

The family of Carl A Landby created this Life Tributes page to make it easy to share your memories.