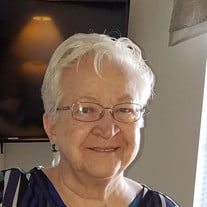 Beloved wife, mother, grandmother and friend Beverly Perry, 88, passed away Friday, November 1, 2019. Mrs. Perry was a resident of Kennewick since 1957, the matriarch of a sprawling family, and was a well-known community member. A viewing will be held from 2pm to 5pm Thursday, November 7, at Mueller's Tri-Cities Funeral Home, 1401 S. Union Street, Kennewick. A memorial service will be held at 2p.m. Friday, November 8 at Hillspring Church, 1153 Gage Blvd., Richland. A Christmas baby, Beverly Jean Boster was born Dec. 23, 1930, in Yakima, Washington, to Charles and Lillian Boster. She grew up along with her beloved younger sister, Charlotte, in the Yakima Valley on various family farms, settling near Granger, Washington, where her father was a dairy farmer and grew vast acreage of sugar beets and corn. Beverly was a popular student who loved school, graduating from Granger High School in 1948. At GHS she was a cheerleader and had several leads in school plays. She enjoyed the friendship of the Jordan and Kinder families growing up and cultivated a lifelong friendship with her best pal, Gerri Lane (Edwards). In 1949 she married one of the Jordan boys, Bill Jordan. Bev and Bill had two sons, Michael and Kenneth, who are just 14 months apart in age. She doted over her two boys, often dressing them the same and spending every day being a wonderful mother and role model for them. Bev had a positive, optimistic view of life and her love was felt by all her family and friends. The Jordans moved to Kennewick in 1957 where Bill was a contractor and carpentry teacher at Columbia Basin College. They were close with her sister's family and the happy days were filled with camping, boating, motorcycle races, sports with Mike and Ken, and strong family ties. In 1964 Bev joined the Kennewick School District where after a 25-year career she retired as executive secretary for the Superintendent of Schools for the district. She made many friends and supported and encouraged many teachers and educators during this time. In 1975, Bev married Robert (Bob) Perry. This began a long and happy marital relationship and joined two large blended families. Together Bev and Bob have 15 grandchildren and 34 great-grandchildren. Bev and Bob were inseparable. They built a home near Two Rivers Park in Finley, tended large flower and vegetable gardens and hosted many backyard barbecues and family fun. For many years after they retired they hooked up their trailer and headed south to Southern California during the winter to enjoy life and visit with Bev and Bob's children and grandchildren who live there. Bev and Bob were very active in their church, Hillspring Church (Formerly Cathedral of Joy), and enjoyed cherished friendship with a Bible study group, the Silver Eagles, that met in their homes for many years. Later, Bev and Bob moved to Kennewick to be closer to family and their church. Bev is survived by her husband of 44 years, Bob Perry, two sons Mike Jordan and Ken Jordan (Karlene), step-children Debbie Buell (Jerry), Sandi Busick (Gary), Vicki Crosley (Dwight) and Ron Perry (Colleen), 15 grandchildren, 34 great-grandchildren, and many cousins, nieces and nephews. Her sister, Charlotte Plum, with whom Bev had a very close lifelong relationship, passed away just one year ago. The family invites friends and relatives to join them at the memorial service on Friday. In lieu of flowers, donations may be made to The Cancer Center or the Hospice House.

Beloved wife, mother, grandmother and friend Beverly Perry, 88, passed away Friday, November 1, 2019. Mrs. Perry was a resident of Kennewick since 1957, the matriarch of a sprawling family, and was a well-known community member. A viewing... View Obituary & Service Information

The family of Beverly J Perry created this Life Tributes page to make it easy to share your memories.