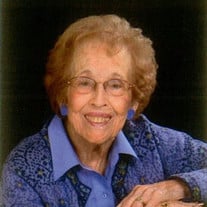 Beverly Jean Bailie, 90, passed away peacefully January 26, 2021 in Seattle. She was born in Walla Walla, WA July 3, 1930 and arrived in Pasco via Colfax in 1940. She was an accomplished singer and pianist, earning extra money singing at weddings and funerals. In her senior year (1950) at Pasco High School she was voted Most Talented. On February 17, 1951 she married the love of her life, Gene Bailie. Beverly started her retail career working for her mother at the Lad and Lassie Children's Shop in Pasco. After her mother retired, Beverly worked at Carl's and later Dawson-Richards. She made many wonderful friends during her retail days, and delighted in being recognized when she was out and about. When it came to gardening, Beverly had a green thumb. Most spring and summer days she could be found in the yard, tending to her flowers. According to her, she had the most beautiful yard and flowers in the neighborhood. She was proud of winning "Yard of the Month" twice. To say she loved basketball was an understatement, she was an avid Bulls, Spurs and Gonzaga fan and had all the team apparel to prove it. If you called during a game, you never made that mistake again! Beverly was a member of the Riverview United Methodist Church. Beverly was preceded in death by her husband, Gene Bailie and son, Steve Bailie. She is survived by her daughter, Jane Bailie of Seattle; daughter-in-law, Kathy Bailie of Kennewick; grandson, Bryan Bailie (Kristi) and great-granddaughter, Madilynn of Minot, ND; granddaughter, Laurie Bailie of San Diego, CA: half-sister, Karle Warren of Clarkston, WA; and numerous nieces and nephews. A graveside inurnment will be held Saturday, April 10th at 1:00 PM at Desert Lawn Memorial Park.

Beverly Jean Bailie, 90, passed away peacefully January 26, 2021 in Seattle. She was born in Walla Walla, WA July 3, 1930 and arrived in Pasco via Colfax in 1940. She was an accomplished singer and pianist, earning extra money singing at weddings... View Obituary & Service Information

The family of Beverly J. Bailie created this Life Tributes page to make it easy to share your memories.